If you’re struggling for something to do during your time at home, then there’s a likelihood that you’ll find entertainment in viewing some of the best Celtics games in history. The team has played through numerous explosive games throughout its time in the NBA, and here are just some of the outright classics that brought the fans in attendance to their feet.

In 2008, the Western Conference was top-ranked by the Los Angeles Lakers, while the Eastern Conference saw the Celtics become the top-seeded champions. It was also a historic moment in the NBA, as it marked the first time since 2000 that the top seeds from both conferences met in the Finals. It was the Lakers first time in the Finals since 2004, while the Celtics showed up there for the first time since 1987! The team was led by the “Big 3” – Paul Pierce, Ray Allen and Kevin Garnett. Prior to obtaining Allen and Garnett, Boston had only won 24 of its 82 games in the 2006-07 season. However, in game four of the NBA Finals 2008, the Celtics rallied from a 24-point deficit to take a 3-1 lead in the series in this stunning match.

The 1988 NBA playoffs may have been won by the Western Conference Lakers team defeating the Detroit Pistons of the Eastern Conference, but game 7 of the semi-finals between the Celtics and the Atlanta Hawks was one of the most prolific of the year. Celtics managed to win the series 4-3 and advance on to the conference Finals against the Pistons, but it was the seventh game that saw them push through with the victory. The game ended with a score of 118 to Boston and 116 to Atlanta, so the outcome was very close, but thanks to some expert gameplay, the Celtics eked it out over Atlanta.

Another Finals that featured the Los Angeles Lakers taking on Celtics was in 1962, with the best-of-seven displaying the attributes of both teams. This marked the Boston team’s sixth straight trip to the Finals, and it was Game 7 that saw them claim the 1962 victory. It did pass into overtime, but the Celtics kept their efforts high to ensure their 110-107 outcome. This marked the second time in the NBA’s history that the Finals were decided by overtime in Game 7. The Lakers potentially would have cinched the win if, in the last five seconds of the game, Frank Selvy hadn’t missed an open 12-footer from the baseline. It was this game that saw a pattern begin for the Lakers, where they didn’t win big games in the Finals, which lasted until 1972.

Without a shadow of a doubt, there’s a reason that this is considered to be the greatest NBA game ever played. It’s unsurprising that many sportsbooks, like those found at Silentbet (but in a land-based effort), witnessed an influx of bets being placed on the Finals of 1976. The Phoenix Suns had only entered the NBA as an expansion team in the 1968-69 season, and prior to 1976, the team had only made it to the playoffs once in 1970, where they lost to the LA Lakers. The 1975 playoffs were squandered by the Celtics, after they lost to the Washington Bullets, despite finishing the season with 60 wins. Game 5 of the Finals became a triple-overtime contest, and it was enhanced by a number of controversies, too. In the end though, the Celtics claimed the victory with a 128-126 finish. 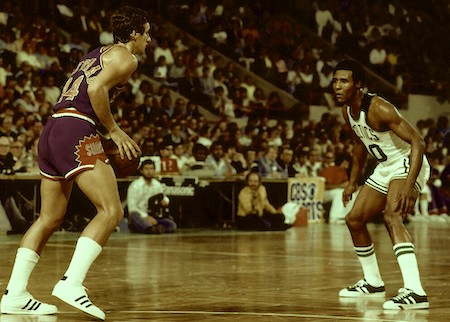