Quarantine Question of the Day: Do you buy the story that M.L. Carr attempted to team Michael Jordan with Dominique Wilkins on the Celtics? 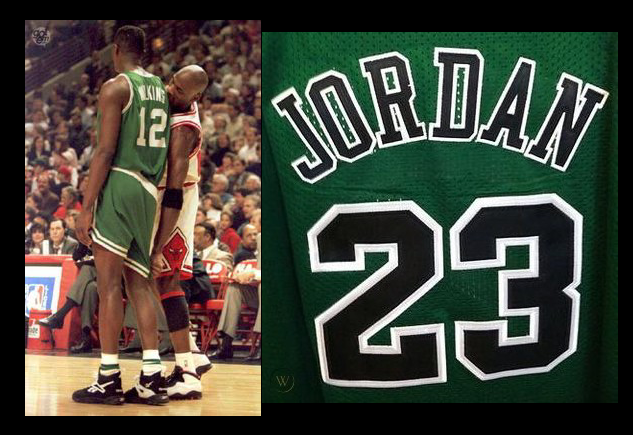 Today's crazy story is actually a rumor from decades ago. About the time back in 1994 that M.L. Carr says he offered the Bulls Jerry Krause a first round pick if the Bulls allowed Carr to talk to Michael Jordan about un-retiring, and leaving baseball to join the Celtics.

Why, though, did the story come and go so quickly? Had there been any truth to Carr’s pursuit?

“As I understand it, Jerry denied having the conversation, which is absolutely not true,” Carr said Monday while reflecting on the quarter-century old phone call to Krause. "We did have a conversation. I reached out to Jerry, realizing that Michael had left the game. I knew Michael was not gone forever.

"I offered Jerry a first-round draft pick [to simply talk with Jordan] and he goes, ‘Well, M.L., Mike is not coming back. He’s retired.’ Well, he is coming back. I think he is. But he denied the fact that I did that, I guess to save face with his owners. … I thought, [Jordan] had already done it in that Chicago uniform, if he got a chance to come to Boston, put on the green, what a great thing that would be from a marketing standpoint. He would have made a fortune. … It didn't happen. It would have been wonderful.”


Today's question:
Do you buy the story that M.L. Carr attempted to team Michael Jordan with Dominique Wilkins on the Celtics?

Personally I think M.L. actually did make the comment/offer to Krause and the Bulls. I think it was such a crazy offer that Krause paid it no mind and forgot it years later. One might thing well the Bulls could have pocketed a first rounder for nothing. That when and if Jordan was going to return to the NBA it would obviously be with Phil Jackson, Scottie Pippen and the Bulls. But Jordan would have taken it as huge disrespect by Krause to sell his time or pimp him like that. If they were buddies, than sure they could have played M.L, but Krause and MJ had a poor relationship by then,

I was actually hopeful when the Celtics signed Dominique Wilkins that he might replicate what Charles Barkley did when he changed teams. Barkley got traded, used the Olympic Games in 1992 to show the world he was still a beast, and then led the Suns to the 1993 Finals. When the Celtics signed Wilkins, he had just come off another All-Star campaign, and he likely had his best chance to make the NBA Finals, until the Hawks traded him at the deadline. At that point it was a three team race in the Eastern Conference between the Jordan-less Bulls, the Knicks, and the Hawks.


For some reason Wilkins struggled mightily in Boston, though he performed like his old self during the team's first round series versus the eventual Eastern Conference Champion Orlando Magic. The crazy thing is 'Nique still had stuff left in the tank. He'd win a championship in Europe the next season and come back and have a solid stint in San Antonio. In what was the final season of the Boston Garden, pairing1994 Michael Jordan with that Celtics team would have definitely made them a contender. Boku casino sites would have for sure given the Celtics great odds during that 1994-95 campaign.

Think the difference of the Cavs the last season with LeBron to the next. And Jordan was better than LeBron. Anyway it was a pipe dream then, but still fun to think about now if for no other reason that we have zero live sports to discuss.

Do you believe Carr that he made the offer or Krause that he never did?

Quarantine Question of the Day: Do you buy the story that M.L. Carr attempted to team Michael Jordan with Dominique Wilkins on the Celtics? https://t.co/h944j81842
— CelticsLife.com (@celticslife) May 18, 2020

Related: 25 years ago today the Celtics played their final game at the Boston Garden

Previous Quarantine Questions of the Day:
Which NBA player will return from inaction having gained the most body fat?
Who are some of the best passers in Celtics history?
Why is Bill Russell overlooked in the G.O.A.T. conversation?
Have the Celtics ever had more All-Stars than the 8 they had in 2002?
Which starting 5 would you pick?
Remember this Bird/MJ commercial and who do you think would have won?
Who wins a HORSE competition between all-time Celtics greats?
How many left-handed C's can you name off the top of your head?
What are some of your favorite buzzer beaters in Celtics history?
You're 18 yrs old, off to college, & your roommate is which Celtic?
Who was a player you hated... and then he became a Celtic?
Who are your favorite non-Celtics players in today's NBA?
Who is the best looking Celtics player in team history?
Who are the best ball handlers in Celtics history?
Which five Celtics in team history had the best post moves?
What's the greatest Celtics game you have attended?
Who are the five toughest Celtics in team history?
Who was your favorite Celtics player while growing up?
Name a former Celtic who would excel in the modern NBA?