The Celtics will be retiring Kevin Garnett's #5 jersey in Boston during the 2020-2021 season. As the greatest Timberwolf in team history you'd expect KG's #21 to have been retired there or in the process of being retired, but that's not the case. There is some SERIOUS bad blood.

In an interviews this week with Shams Charania of The Athletic which was intended to be one of those upbeat "Hey you just made the Hall of Fame, how excited are you?" pieces, Garnett got heated when discussing Wolves owner Glen Taylor.


The Celtics announced in February that they will retire your No. 5 jersey during the 2020-21 season — but your jersey still isn’t hanging in the rafters in Minnesota. How soon will we see that take place and where do you stand on it?

(When Garnett returned to Minnesota in 2015, a move brokered by [Flip] Saunders, he had discussed his desire to one day join the ownership group succeeding Taylor and/or being a key decision-maker in the franchise. When Saunders passed away, Taylor charted a course forward and hired Tom Thibodeau to take over the franchise, which Garnett felt was going back on the plans he and Saunders had discussed. League rules prevented Taylor from having ownership discussions with Garnett while he was a player.)


“Glen knows where I’m at, I’m not entertaining it. First of all, it’s not genuine. Two, he’s getting pressure from a lot of fans and, I guess, the community there. Glen and I had an understanding before Flip died, and when Flip died, that understanding went with Flip. For that, I won’t forgive Glen. I won’t forgive him for that. I thought he was a straight up person, straight up business man, and when Flip died, everything went with him.

“There’s no reason to complain. Just continue to move on. My years in Minnesota and in that community, I cherish. At this point, I don’t want any dealings with Glen Taylor or Taylor Corp. or anything that has to do with him. I love my Timberwolves, I’ll always love my guys, I’ll always love the people who fuck with me there. I’ll always have a special place for the city of Minneapolis and the state of Minnesota in my heart. But I don’t do business with snakes. I don’t do business with snake mu’fuckas. I try not to do business with openly snakes or people who are snake-like.”

This isn't the first time KG has gone off on Taylor since he retired. Here's an interview from October 2018:

It's a shame because KG really should get honored in Minnesota. For their part the Wolves posted several congratulatory tweets to KG after the Hall of Fame election announcement: 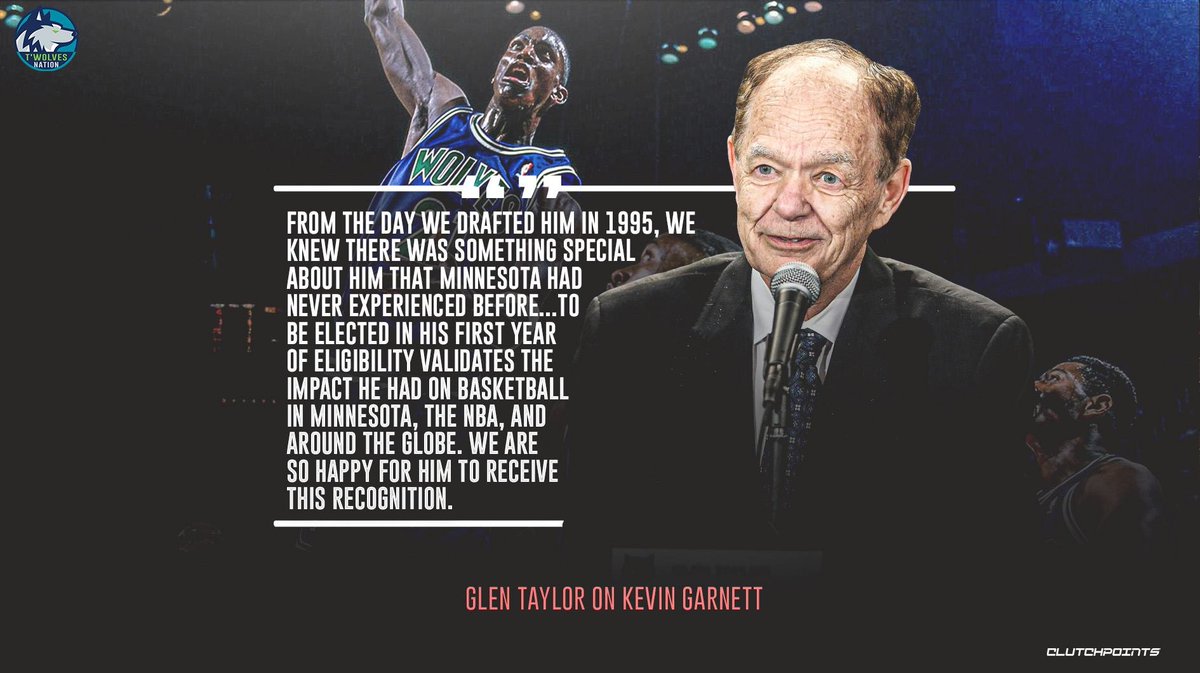 No word of a response from Taylor since the Atlantic interview as of yet. This is a tough topic, but I can totally relate to KG not wanting to have anything to do with "snakes." I can't get down with liars either. There is a possibility that what Flip Saunders promised KG was Flip's intent, but he never officially cleared it with Taylor prior to his tragic death. If that was the case when Taylor brought aboard Thibs, you couldn't fault Taylor for not giving KG a front office position with say or ownership stake. Of course that's assuming the best of Taylor which I tend to give people initially.

Now if Taylor previously told KG he'd be a "key decision maker," and then reneged on that, then yes that's a snake move. It is Taylor's right to change his mind and decide he has no desire to sell the team. I don't know. This whole thing sounds like a mess. Imagine if Bill Russell or Larry Bird were estranged from the Celtics like this? Hopefully someone can broker a peace between KG and Taylor. And if Taylor did in fact renege on an understanding with Garnett he apologizes and makes it right.