News is coming pretty fast and furious today about the status of American sports due to the Coronavirus. After San Francisco forced the Warriors to play tomorrow's game without fans, the NCAA announced that their whole tournament would be played fan-less. Now we have a report that not only is the NBA considering going the fan-less route, they are also contemplating suspending the season for a period of time.


The greater consensus among the teams is continuing to play games without fans in arenas, and the league is expected to move toward a resolution on Thursday, sources tell ESPN. https://t.co/Op82C0aR6E
— Adrian Wojnarowski (@wojespn) March 11, 2020

There is a growing number of people within the league who see a hiatus as the most responsible option -- with the hope coronavirus can be contained enough to return to normal operations. https://t.co/Kf2h4hcPaG
— Chris Mannix (@SIChrisMannix) March 11, 2020

Jaylen Brown also gave his thoughts on the pandemic: 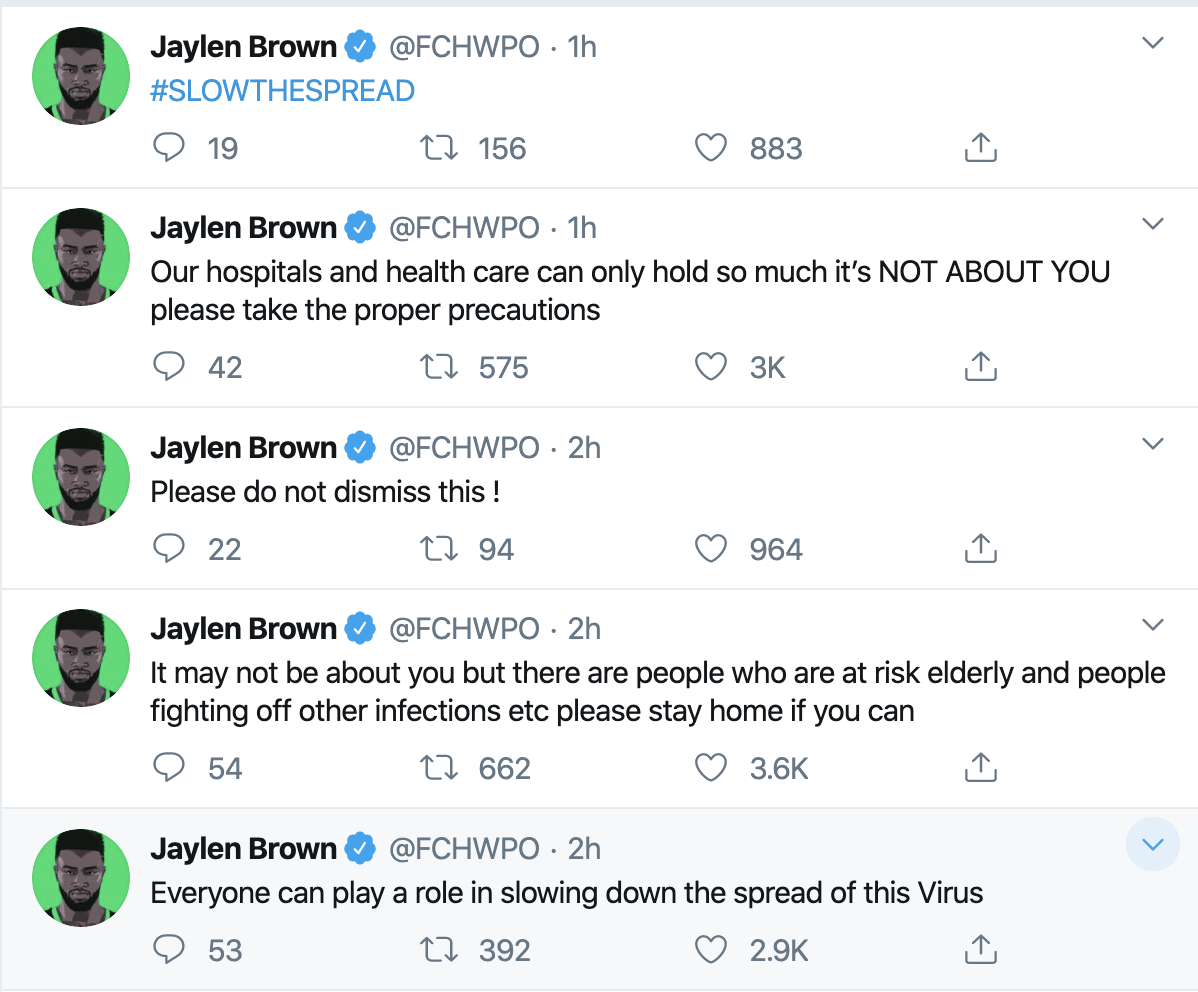 One thing to keep in mind is it's not all about you. I saw a lot of NBA media whining about being told locker room interviews would be ceased this week. But as soon as it looked like games would be played without fans and the media would be some of the chosen few to still be able to attend you no longer heard them complaining. It would be nice if people's views weren't just spoken through their own selfish lenses.

Regarding the coronavirus, I've heard a lot of people say don't worry, it's only extremely dangerous to the elderly and sick people who already have medical issues. Wait, when did we start just dismissing groups of people as less important? And who here doesn't have, know, or care about any people in those subgroups.

Good to see that the NBA isn't waiting on this issue. My guess is the NBA will decide tomorrow to start playing games in arenas without fans. I don't think they will go the hiatus route. Too much money involved and postponing the season causes a ton of issues with the draft, free agency and the beginning of next season.

Update 7:50pm: It appears the NBA has decided to go the fan-less arena route.

New story filed to ESPN:
The NBA’s Board of Governors shared a consensus on Wednesday to continue the season playing games without fans in arenas amid the coronavirus crisis, and Commissioner Adam Silver is expected to move in that direction with a decision on Thursday.
— Adrian Wojnarowski (@wojespn) March 11, 2020