The Boston Celtics eked out a narrow 112-106 win over the Cleveland Cavaliers to wipe the Nets loss from their minds. The Hospital Celtics got big-time production from their bench (43 points) and were able to hold off a feisty Cavs team in a much needed victory for team moral. 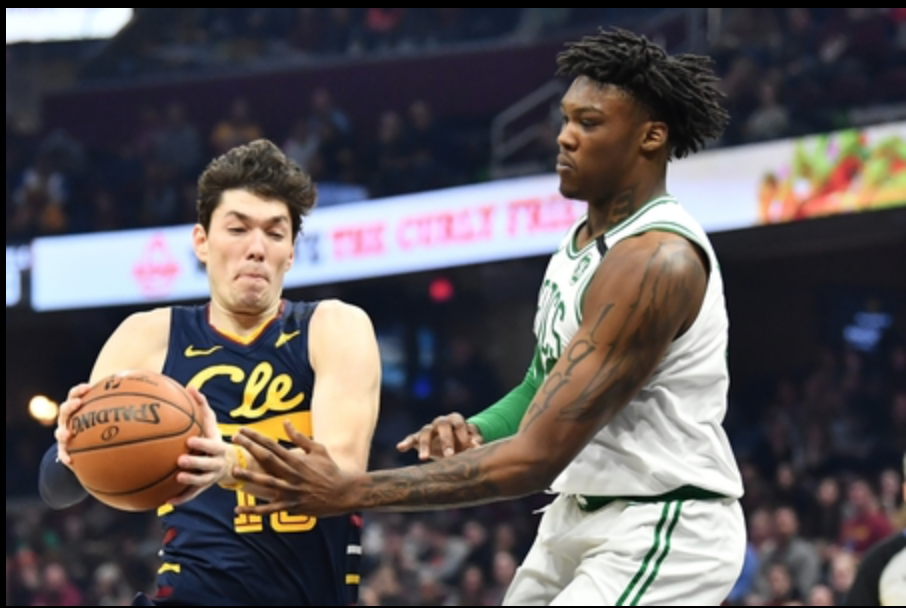 If the Celtics were a TV show when they took the floor against the Cavs, they would have been The Walking Dead. Although Jayson Tatum returned to the lineup, the C's were without Jaylen Brown (hamstring), Gordon Hayward (right knee contusion), and Kemba Walker (rest). They were going to need a big effort from a number of bench players if they were going to right the ship after the catastrophe against the Nets.

After the Cavs jumped out to a quick 6-2 lead after some offensive rebounds and a few free throws, the Celtics turned on the jets and scored the next 13 straight points. Tatum, returning from a one game absence, knocked down three straight threes and scored nine of the 13 points during the run. With the other top options out of the game, Tatum was going to need to perform, even if the Cavaliers were sending double teams at him almost immediately.

Cavs have sent doubles at Tatum a couple of times near the top of the key already. Quick passes out of them both times to the roller for a bucket. Good progress as he sees more and more doubles.

EARLY RETURNS: The #Celtics, looking to get back on a winning track, lead the #Cavs 28-27.

The Celtics finished the first quarter shooting just 34 percent from the floor, but were able to take a 1-point lead into the second thanks to seven offensive rebounds and a number of second chance opportunities. The Cavs kept it close early, but Boston opened the second quarter on an 8-0 run. Semi Ojeleye , who only entered the game against the Nets in the overtime period when every started had either gotten injured or fouled out, knocked down back-to-back threes to key the run. Ojeleye hit three of his first four threes, and was a big lift off the bench. After knocking down his third three, Ojeleye walked off the court yelling, clearly excited to be contributing after being so often left out of the regular rotation.

After Ojeleye's spurt, Tatum took over. He scored another eight points, and did it effortlessly. No player on the Cleveland team had a chance at stopping him, and he knew that.

he makes it look so easy pic.twitter.com/tYEEtpf6SH

Not only was Tatum scoring, he was facilitating as well. After the Cavs started doubling him on the catch, Tatum made a number of calm, precise passes to the open man, to the tune of four first half assists. The playmaking, along with being able to make the right pass out of a double team, is the next step to launch Tatum into the superstar category.

Kevin Love and Colin Sexton were the straws staring the drink for Cleveland. Both players have been playing considerably better since the Cleveland franchise made a change at the head coach position, and tonight was no different. The two combined for 32 points on 10-17 shooting, and seven of those points came during a 9-2 run that the Cavs went on to end the half. After leading by double digits for most of the second, the Celtics went into the halftime break leading by just six, 58-52.

HALFTIME RETURNS: Those who invested in Semi Ojeleye have turned a nice profit, helping the #Celtics cling to a 58-52 lead vs the #Cavs
🔥'n up: Semi Ojeleye (season-high 15 pts ... and counting)
⬆️ Tatum (17 pts leads all #Celtics0 scorers)
⬆️ C. Sexton (Game-high 18 pts)

The Cavaliers continued their run after the halftime break. They opened the third quarter on a 9-1 run and took a 2-point lead, their first since the opening minutes of the game. Sexton and Larry Nance Jr. scored all of the points during the run, and the Celtics were stumbling once again. Robert Williams III, of all people, came in and gave the Celtics a nice boost after Cleveland had taken the lead. He is still working his way back into game shape after missing months of NBA action, but his athleticism has been a nice addition, even if only in short spurts.

After Williams gave Boston a spark, the team went on a 12-2 run to regain the lead and get a little separation. But when Tatum went to the bench midway through the third, the Cavs started to regain momentum. Marcus Smart didn't have his shot falling (6 points, 2-12 shooting), and Ojeleye didn't have the same pop after scoring 15 first half points, but missing much of the third quarter after taking a knee to the midsection. Love, Nance, and Sexton continued to push the ball, and the size of Cleveland started to become a bit of a problem on the offensive glass.

Both teams traded baskets as the quarter drew to a close, but a late jumper by Tatum and a coast-to-coast dunk from Grant Williams gave the C's a 4-point lead heading into the final frame.

Up 4⃣ after 3⃣ pic.twitter.com/kERrMEBlab

After the Cavs scored five straight points to open the fourth and take a 1-point lead, both teams traded the lead for the next several minutes. Tatum was being bottled up, but the Celtics were able to get some nice contributions from Ojeleye and Tremont Waters, the latter of which had just been called up from Maine. Enes Kanter also gave Boston some nice bench minutes, crashing the boards like he usually does and getting a number of second chance points. On the other side, Sexton continued to dominate. He had 34 points midway through the fourth.

Smart came back into the game and finished two tough layups at the rim to give the Celtics the lead. Then Tatum, who had become frustrated with a lack of calls as the night had gone on, made a tough and-1 floater in the lane, although he missed the free throw. With the Celtics up four, Love knocked down a baseline jumper and got fouled by Smart in the process (apparently Smart's face was in the way of Love's elbow). With 3:34 left to play and a one point lead, Brad Stevens called a timeout.

After the timeout, a Tatum layup, two free throws from Smart, and yet another Ojeleye three extended Boston's lead out to six with just two minutes to play. Sexton tried his best to keep the Cavs in it, but a Cleveland miss and a Smart floater bumped the lead up to eight with 1:27 left. With last night's meltdown fresh on their minds, the Celtics had no intentions of letting this one slip away.

Another 3 for Ojeleye. 22 points for him. He might be pushing 30 in this one if it wasn't for the knee to the groin.

Tatum led the C's with 32 points, nine rebounds, and six assists, Ojeleye added a career-high 22 points off the bench, and Smart chipped in 18 points. Sexton scored a game-high 41 points, and Nance had a double-double with 19 points and 15 rebounds.

The Celtics will be back in action on Friday night when they host the Utah Jazz. The NBA championship odds still have the Lakers as a slight favorite, but don’t count out the Celtics which remain within the top 5 teams fighting for the title