Celtics suffer worst loss of the season, fall 129-120 to Nets

The Boston Celtics suffered their worst loss of the season after giving up a 21-point lead and losing 129-120 to the Brooklyn Nets. Boston allowed 51 points in the fourth quarter and squandered what should have been an easy win over an inferior Nets team. 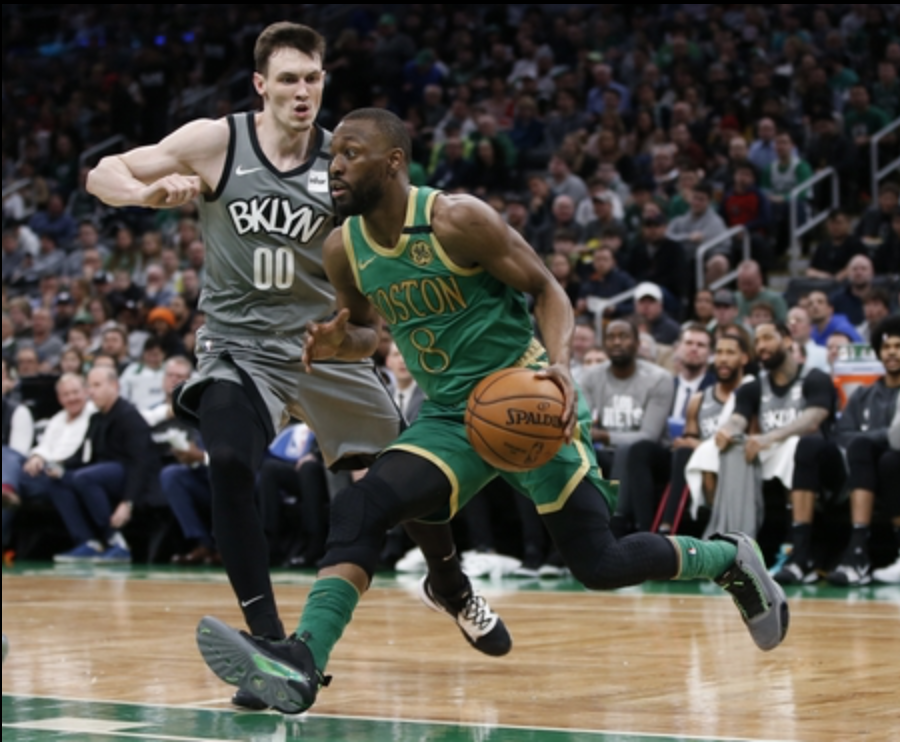 Despite being named Eastern Conference Player of the Month just hours earlier, Jayson Tatum (illness) was forced to miss tonight's game. The Celtics, though, welcomed back Kemba Walker to the lineup after missing the team's last five games with a knee issue.

He likely will return tomorrow in Cleveland.

After Spencer Dinwiddie drained a contested three to open the scoring, the Celtics went on a 9-2 run, thanks in large part to Daniel Theis. He scored six of the team's first nine points, knocking down a few mid range jumpers and a put back off of an offensive rebound.

Both teams were feeling it on the offensive end early. The two teams combined to shoot 17-28 (60 percent) over the first seven minutes of play, although there were a few highlight defensive plays for the C's:

Marcus Smart meets it at the top! 🤯

Boston was able to take a 30-21 lead midway through the first quarter thanks to some balanced scoring (eight of the 10 players who played in the first quarter scored), but the Nets answered with a 9-3 run to finish the quarter. The three points for the C's during that span, by the way, were from Carsen Edwards who saw some meaningful rotation minutes for the first time in what feels like forever.

After starting the game on fire, the Celtics went through a 4-22 shooting stretch from late in the first quarter to the seven minute mark in the second. Brad Stevens was deep into his bench looking for offense with Tatum missing, so the likes of Edwards, Javonte Green, and Grant Williams were getting extended looks. Add in Walker getting back into game shape, and that really stalled the offensive production. Luckily for the C's, the Nets weren't able to make any real effort to cut into their lead. Although Brooklyn was shooting better than the Celtics from the field, they had 10 turnovers midway through the second and 13 less shot attempts.

The shooting struggles were directly correlated to when the Nets went into a zone defense. Without Tatum, and Jaylen Brown out due to foul trouble, Boston just didn't have enough reliable outside shooting to make Brooklyn pay. Despite some rough stretches of play, the Boston defense held the Nets to just 22 points over the final 16 minutes of the half, and the team took a 13-point lead into the halftime break.

Not a lot of energy in the building, but the #Celtics are doing what they have to do and lead the #Nets, 56-43 at the half.

Marcus Smart, who has started the last six games in place of Walker/Tatum, was exceptional on both ends of the floor. Although not scoring very efficiently (nine points, 3-10 shooting), Smart had six assists, three rebounds, two steals, and two blocks at the half. Smart has proved to be a viable starting point guard over the past few weeks, and watching his passing has been a true delight.

The Brooklyn guards, Dinwiddie and Caris LeVert, were the only opposing players making an impact. The two combined for 24 of the teams 43 halftime points, and no other Net player had more than four points. The Celtics had a great defensive half, but they're were quite a few occasions where LeVert and Dinwiddie seemed to have free line drives to the rim without much resistance.

The Celtics announced Gordon Hayward has a right knee contusion and will not return.

The Celtics got a dose of bad news coming into the second half, as Gordon Hayward was removed from the game because of a knee bruise. The injury occurred at the end of the first half, when Theis fell backward into Hayward's knee.

With Hayward out for the game, and Walker resting to start the half, Brad Wannamaker and Green filled in the opening lineup and made an instant impact. The two bench players combined for six of the team's first 11 points in the third, and made a few plays on defense as well.

I've always said that the Celtics' strength is their bench scoring

With the bench players contributing on offense, Boston used an 11-0 run to take a 21-point lead, but the Nets answered back with a 7-0 run of their own. After struggling with foul trouble in the first half, Brown came out ready to take on the scoring load. He scored nine points in the third quarter, and kept the Nets at bay throughout the quarter.

The Nets opened the fourth quarter on an 8-3 run, cutting the Boston lead down to just 12, but apparently the TD Garden fans were unfazed, as they broke out the "Where is Kyrie?" chants with just over nine minute remaining. But the run the Nets went on was no joke. After hovering around a 10 or 12 point deficit for most of the quarter, LeVert caught fire and pulled Brooklyn back into the game almost on his own. He canned three after three and slowly chipped the Boston lead down to just two with a minute and a half to play.

Walker, whose minutes were being monitored all night, was able to hit some timely threes, while Robert Williams III gave the team some impressive minutes with Theis on the bench with foul trouble. Williams was just in his second game since an extended absence, but brought a real above the rim presence that the Celtics haven't had.

Brown hit a corner three to put the Celtics up by six with under a minute to play in the fourth, and that looked like it would be enough to close the game out. But the Nets kept pushing, and ended up with the ball with 1.4 seconds on the clock and down by just three. LeVert caught the inbounds pass and squared for a three, but got fouled by Smart. LeVert hit all of his free throws, and the game that was once a done deal was headed for overtime.

The Nets scored 51 points in the fourth quarter. They sent it to overtime after the Celtics fouled Lavert on a 3 with 0.2 seconds left. Just bonkers.

The Celtics were incredibly shorthanded in the overtime period. Hayward/Tatum were out with injury, Walker was at his minutes restriction, and Brown was getting a tight hamstring stretched out. The Hospital Celtics were back in full form. After Smart picked up his sixth foul, Boston was sporting a lineup of Edwards, Wannamaker, Green, Semi Ojeleye, and Theis.

LeVert just went insane in overtime. He scored eight straight points and gave the Nets a 6-point lead with just over a minute to play. The Celtics just didn't have any answers on the offensive end with their top five players out. This will go down as one of the worst losses of the season for the C's.