Another Day, Another 49 Rebounds 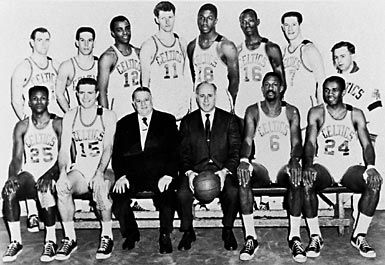 Sherman, set the Way-back Machine for this date 55 years ago, Thursday March 11, 1965 – the place, the Rhode Island Auditorium in Providence.

Even as they were establishing a new NBA standard for victories, the 1964-65 season was not an easy time for the six-time defending champs. The sudden passing of franchise patriarch Walter Brown the previous summer, while strengthening the players’ resolve to compete in his honor, had nudged the viability of the business onto thinner ice (a “throng” of just 3,145 attended this contest in co-owner Lou Pieri’s home base) …

… and Wilt Chamberlain's mid-season return to Philadelphia as a 76er had given birth to a “Process” that would require just two years to grow to fruition. 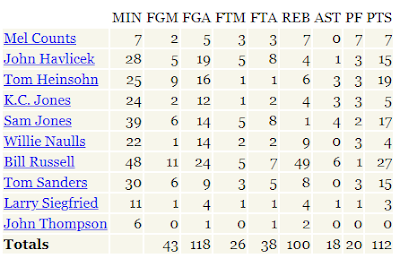 The full box is available here.

And if you’ve never checked out Michael Hamel’s treasure trove of Celtic legacy, do yourself a favor and “browse.”

Mr. Russell's opposite number in the pivot that night was a 7-footer named Reggie Harding, maybe the most "troubled soul" ever to don an NBA uniform.

The Pistons' player-coach was 24-year-old Dave Debusschere, for whom that double-duty seemed insufficient so in those days he'd "moonlight" as a pitcher for the Chicago White Sox.