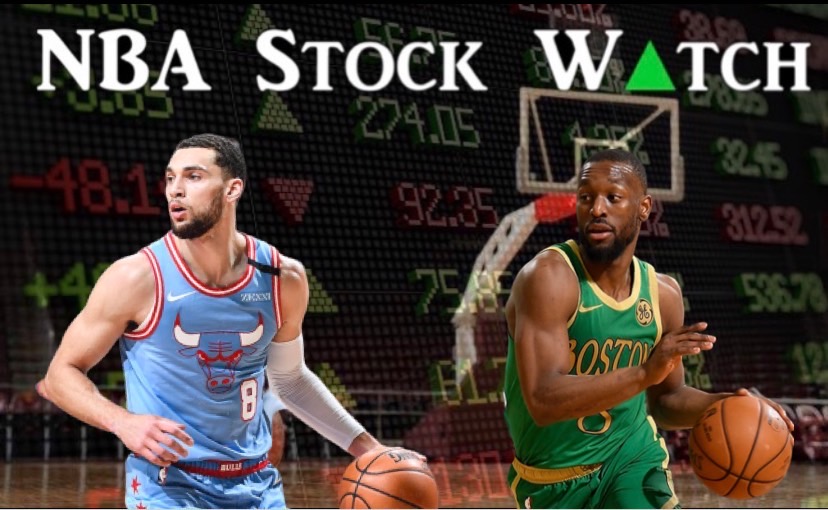 It may have been a short week of basketball, but it was a long weekend filled with All-Star festivities. In addition to the results of the regular season games, I will cover everything you might have missed from All-Star Weekend such as a game of flip-cup, a controversial dunk contest ending, and a competitive All-Star format.

He may not have been a participant in the Dunk Contest of the All-Star Game, but Bulls guard Zach LaVine has been showing off his talent heading into the break.

The 24-year-old played in just one game this week, but he certainly made his mark in it. He posted 41 points on 71.4% shooting and a crazy 8/11 three-point percentage. He was simply lights-out in this game, but his impact didn't end there. LaVine also grabbed nine boards, assisted four baskets, and added two steals. His shooting performance alone was enough to land LaVine a spot on this list and a healthy stock value.

It's tough to feature a guy here who just played in the NBA All-Star Game, but hear me out. In his two games that actually counted this week, Kemba hasn't been his normal self.

Walker averaged an underwhelming 16.5 points through two games, shooting just 29.4% from the field and 31.3% from deep. He shot 5/17 in both nights, not really able get anything going. The Celtics were -24 when Kemba was on the court against Houston, in a game they lost by 11. And when it was all said and done, the point guard was a -2 net rating on the week, leaving a lot to be desired. Walker has already moved past this cold stretch by dropping 23-points in the All-Star Game on Sundya night (tied for the third most points in the exhibition). Considering this, I don't think it will take long for Walker's stock to recover.

I tend to shy away from featuring rookies in this column since, well frankly, their stock values typically have nowhere to go but up. For Zion, I'll make an exception!

It took a few games for him to start feeling comfortable on the court, but the rookie sensation is officially here. He finished the week 5th in scoring after averaging 31.5 points per game. He had his way in the paint, shooting 58.3% without hitting any threes. He's already proving to be one of the best offensive rebounders in the game, flashing incredible instincts mixed with quick hands to snatch 7.5 rebounds per game. Zion also showed that he can be a capable passer, going on to finish with three assists per game in his two contests of the week. Get ready, folks. Zion is only getting better.

The Jazz are certainly no strangers to this column! When they're playing well, they tend to go on impressive streaks over a tough slate of match-ups. That was the case in week 16.

In their only two games of the week, Utah went up against two tough teams - the Mavericks and the Heat. Even though Luka Doncic didn't play, the Mavs still has a solid roster and defeating them on the road was a quality win for the Jazz. They then hosted the restocked Miami Heat and their new-look roster with Andre Iguadola and Jae Crowder. Still, Utah held them to just 101 points and cruised to a 15-point win. When you go back a bit further, the Jazz are on a four-game win streak and beat the Rockets as well. Overall, the Jazz made the most of their short, tough week of basketball.

It's been an up and down type of year for the Blazers. Despite Damian Lillard's heroics, Portland is on the outside looking in when it comes to the playoff picture. There is still plenty of time left, but as of now they're still six games under .500 after losing two straight going into the All-Star break.

The Blazers had a pair of winnable games on their slate this week, yet failed to take advantage of either. They got blown out by the Pelicans on Tuesday, losing by 21 points while surrendering 138 points. The next night, down in Memphis, Portland couldn't keep up with the 27-26 Grizzlies and lost their second game in two nights. They had a bottom-five offensive and defensive rating on the week, illustrating their overall struggles. And to make matters worse, their star point guard is now banged up. Not a great string of events for the Blazers!

It's not everyday you see the Wizards' stock on the rise! Washington won both of their contests this week, quietly fighting back into the playoff picture.

One of the worst defensive teams of the year managed to turn it around on that end of the court. The Wizards finished with the second best defensive rating in the league, holding opponents to an average of 105 points. All-Star snub Bradley Beal has been playing some "prove the doubters wrong" basketball, which has led to some big performances. As a team, the Wiz had a 14 net rating which trailed just the Cavaliers for the top mark of the week. It's a rare Stock Up for Washington!

Now that I have every college kid's attention - let me explain why this classic drinking game is on the rise after this weekend!

We saw a lot of innovation by the NBA in this year's All-Star weekend. One of the new things they tried was during the the NBA Celebrity Game on Friday night. Although the game itself was mostly uneventful, one of the new game rules really caught my eye. After the third quarter, the two teams squared off in a flip-cup match to see who would win possession. Oh, and the losing coach would be sent to a penalty box to start the 4Q:


Flip cup at the celebrity all-star game. This was so terrible and this whole game as been cringeworthy 😂😂😂#NBAAllStar #nba #celebrityallstargame pic.twitter.com/4bG3EfnPuD
— CapWize.com➐ (@CapWize) February 15, 2020


The second night of All-Star Weekend was also great. We had a lot of upsets in the Skills Challenge, a walk-off game winner by Buddy Hield to win the Three Point Contest, and an epic dunk-off between Aaron Gordon and Derrick Jones Jr. in the Dunk Contest. However, the Dunk Contest turned into quite the controversy after some questionable actions by the judges.

First of all, the judging wasn't very consistent all night. Some 7-8 dunks were awarded inflated scores, while some 50-point dunks got robbed. What put it over the edge, however, was how it all ended. As I'm sure most of you are aware, Gordon brought out Tacko Fall for his final dunk and, whether you want to argue it or not, he dunked over the 7'5" big man...


The crowd's reaction when they found out AG lost. pic.twitter.com/cIJGHNhZhj
— SportsCenter (@SportsCenter) February 16, 2020


This is where the controversy comes in - the judges reportedly decided to make the contest end in a tie so both players would win. Common said that one of the judges "messed up" the score, which resulted in Jones Jr. winning by one point. Most people around the NBA world suspect it was DWade who purposely gave Gordon a 9 to help Jones Jr - who is a member of his beloved Miami Heat - win. And if you play back the above video, you will see Wade stand up and take his earpiece out, suggesting that he knew it was over. You can also see the surprised looks of the other judges, who all turn to that side of the table. I don't know, Wade, you seem pretty guilty here!

Also, can I suggest that the league should only have former dunk contest participants as the judges?

To cap it off, the All-Star Game itself was incredible. The NBA (and Chris Paul, who had the initial idea) miraculously found a way to actually make these stars compete down the stretch. The new format made each quarter a bit more competitive since players were playing for thousands of dollars to give to charity, and the fourth quarter format where both teams were trying to reach the same 157 point total made players actually play some defense!

We saw three offensive fouls in the 4Q:


An array of blocked shots, including two by Giannis on LeBron:


You know it's a competitive game when Chris Paul is snitching on people in crunch time. And that's exactly what he did! I was skeptical of the new format, but I must say it made things much more competitive, which is the top element that fans have been looking for from All-Star games.

It was a fun weekend! We will be back next week with a short Stock Watch to sum up the limited slate of games in store.