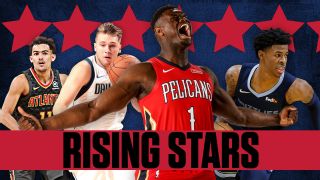 Not a surpise based on performance this season, but after a strong summer league there was some hope that one of Danny Ainge's recent draftees would break out this season. Robert Williams got injured and Grant Williams and both Carsen Edwards and Grant Williams have struggled with their shots. Romeo Langford is still too raw and Tremont Waters and fan favorite Tacko Fall have spent most of the season excelling up in Maine.

Of course the Celtics had a pretty decent draft the year before when they picked Jayson Tatum at #3. Tatum will be be playing with the big boys as he was named an All-Star reserve last night.

Here are the Rising Stars rosters:

The Celtics have struggled during Danny Ainge's tenure at finding International talent. They've rarely drafted non-U.S. players and when they have they weren't the right ones. Still a chance a Celtic could be named to the Rising Star game due to injuries, but I highly doubt it. Tacko Fall on the World Team would have been amazing.

Related: Congrats to Jayson Tatum on being named to his first NBA All-Star game