In a day marred by tragedy, the Boston Celtics fell to the New Orleans Pelicans 123-108 on Sunday night. Whether their heads weren't in the game, or they were just outplayed by a more energetic team, the Celtics got off to a slow start, and didn't have the fire power to complete a comeback. The Boston bench was outscored 38-8 by the Pelicans, and 16 turnovers didn't help matters either. 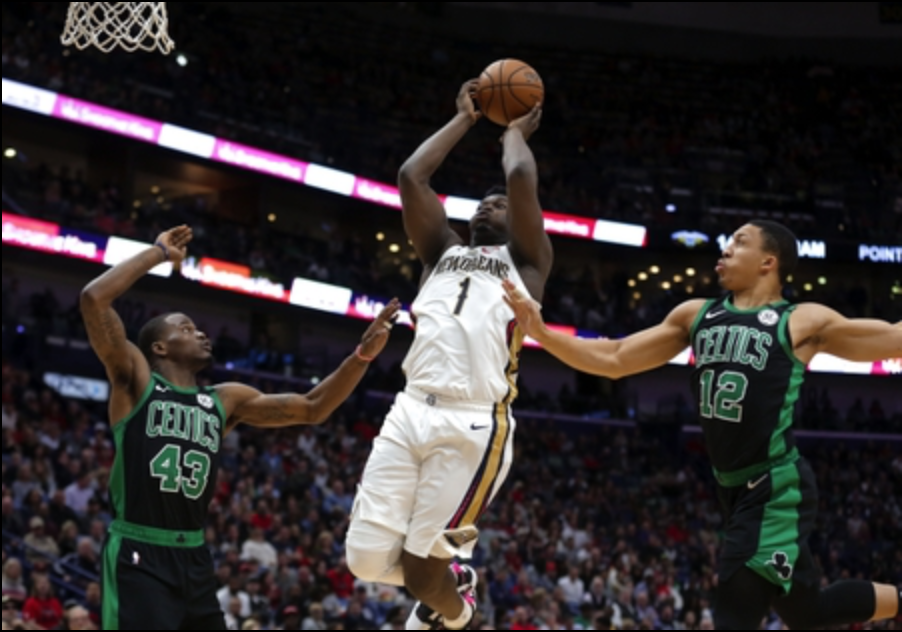 As was the case for a number of NBA games, Boston and New Orleans took consecutive 24-second violations to start the game as a tribute to Kobe Bryant, who tragically passed away in a helicopter accident on Sunday morning.

In a game that seemed utterly meaningless after the events of the day, the Celtics were once against without the services of Jayson Tatum, who is still recovering from a groin strain sustained in the Grizzlies game earlier this week. On the good news front, Jaylen Brown was back in action after missing the last two games with a sprained ankle.

The Celtics jumped out to an early 7-2 lead, but the Pelicans answered back with a 9-0 run to take an 11-7 lead. Zion Williamson, who might be the biggest "must-see" attraction in the league, was active early, accounting for five points and six rebounds in the first six minutes of the game. We haven't necessarily seen the ferocious dunks just yet since his return from injury, but you can see that the knee injury has done nothing to limit Williamson's explosion.

Marcus Smart just asked for a sub and limped toward the locker room.

As the Celtics battled back to keep the high-flying Pelicans grounded, Marcus Smart exited the game with what looked like a twisted right ankle. An injury to another one of our key players is not what this team needs.

The Celtics struggled from the field to start the game, shooting just 7-24 (29.2 percent) in the first quarter. They also had four turnovers. Gordon Hayward (7) and Daniel Theis (6) combined for 13 of the team's 20 first quarter points.

Despite the score, the Celtics got some good news as Smart returned to the floor to start the second quarter. After going scoreless in the first, Kemba Walker scored seven straight points for the C's to cut the deficit to single digits. Williamson continued to be a thorn in Boston's side as the second quarter continued. As A. Sherrod Blakely notes below, the Celtics did a good job bothering the initial shot of Zion, but his elite athleticism was killing the C's on the boards:

The initial defense on Zion Williamson has been pretty good so far. Where he kills teams, is on misses where his speed, athleticism and instincts result in a ton of 2nd-chance scoring opportunities.

The Celtics looked a step slow on the defensive end. Even with Williamson on the bench, New Orleans moved the ball quickly and got a number of open looks. The Celtics did well to cover the first 90 percent of the possession, but seemed to get lost at the last second to give up a good look.

The Pelicans were bullying the Celtics on the glass. Without Tatum and Enes Kanter, Boston was just too small on the glass, and it was one of the main reasons they took a 20-point lead into the locker room. New Orleans had 10 offensive rebounds in the first half, which led to a number of second chance points, including many demoralizing buckets after New Orleans just outworked the Celtics multiple times.

Four offensive rebounds for the Pelicans on that possession that ended with a Hart three-pointer.

Pelicans close first half on 10-0 run. Ugly half for C's on both ends of the floor.

The Celtics couldn't get much going in first half of the third quarter in the way of a comeback. Boston was having more success scoring the ball, but New Orleans had an answer every time. Jrue Holiday was strong going to the basket, and made a number of tough layups to extend the lead when the Celtics strung some hoops together.

The Celtics continued to heat up, though, as the third quarter went on. Walker made a ton of shots, and the Celtics shot the ball very well, but gave up a ton of free throws while trying to be aggressive on the defensive end. The defense was better, and the energy was better, but they were going to have to defend without fouling to have a chance.

Celtics are shooting 67 percent in this quarter but the early free-throw penalty for New Orleans has slowed their gradual comeback a bit.

The Celtics cut the lead down to just eight late in the third, thanks in large part to 16 third quarter points from Walker, but Holiday hit a big three to extend the lead to 10 heading into the fourth quarter. The Celtics had a chance, but it was going to be an uphill battle.

39-point third quarter for Celtics helps trim the deficit down to 10.

Boston continued to push, and got the lead down to six with just over eight minutes to play, but JJ Reddick, who had scored 17 points at that point, knocked down a big three to put the Pelicans up by nine. Williamson then bullied his way to the rim for a layup and Brad Stevens was forced to call a timeout with the team down 11.

Boston's never-say-quit attitude kept them in the game, but they just didn't have enough offense to close the gap or really give the Pelicans a run for their money.

Holiday led the Pelicans with 25 points, Williamson finished with 21 points and 11 rebounds, and Lonzo Ball had a game-high 15 assists. Walker Led all scorers with 35 points, while Hayward added 23 points, and Brown chipped in for 20 points.

The Celtics will be back in action on Tuesday night, when they face off against the Miami Heat in a clash of two Eastern Conference elites.