The Boston Celtics dismantled the Memphis Grizzlies 119-95 on Wednesday night. On the back of their big time win against the Lakers, the C's continued their dominance and put this game out of reach by the middle of the third quarter. They slowed down the high-flying Grizzlies, winners of seven of their last eight games, with a renewed defensive intensity and a balanced scoring attack. 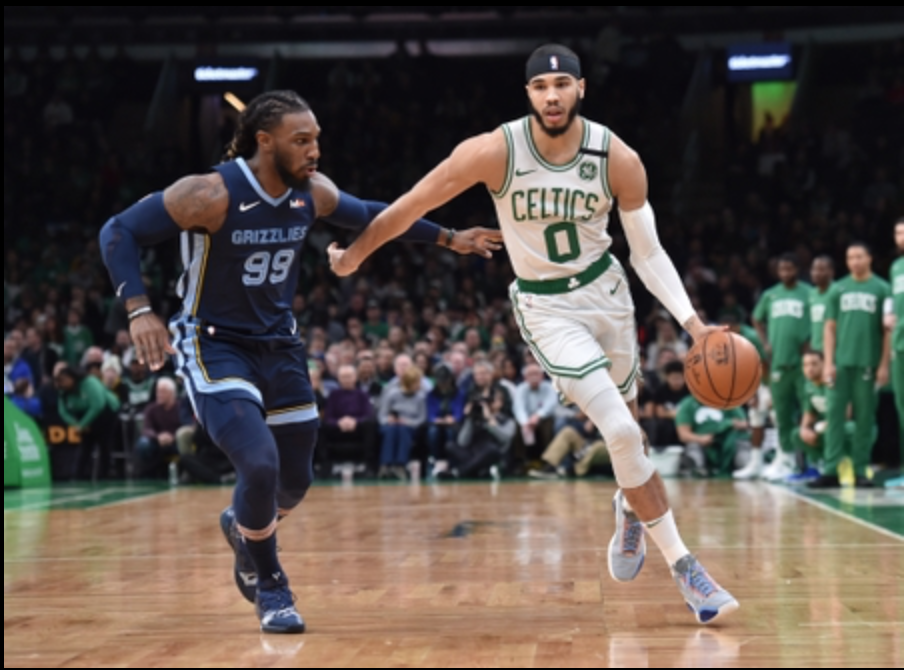 After finally having their starting five back in tact for the first time in what felt like weeks against the Lakers, the C's went back to having a man missing when it was announced that Jaylen Brown would miss the game with an ankle sprain. Although the injury is not deemed to be serious, it would've been nice to string together a few games with a full unit after how good they looked on Monday night.

Brad Stevens thinks Jaylen Brown will be back from sprained ankle “sooner rather than later.”

Neither team got off to a hot start on offense. In a TD Garden that was supposedly incredibly cold, both teams combined to shoot 5-20 over the first six minutes of action. While the shots weren't falling right away for Boston, their defense was turned all the way up. They were forcing a few turnovers and had a ton of deflections. It seemed like almost every Memphis shot was coming out of a scramble forced by Boston's defense.

So many deflections for the Celtics already in this one.

Celtics offense still isn't there to start but the defense has been on point so far.

And just as I finished writing that sentence, Memphis knocked down three straight threes, two from Jaren Jackson Jr. and one from Jonas Valanciunas. With Jayson Tatum and Daniel Theis heading to the bench, the Grizzlies looked a lot more comfortable and able to find open looks. Marcus Smart gets a lot of the attention on the defensive end, and rightfully so, but Tatum and Theis have been a crucial part of the defensive scheme in Boston.

After missing his first shot, Jackson Jr. made his next four, including two threes and two tough layups. He also blocked a few shots, including a three point attempt from Gordon Hayward, that he kind of just snatched out of mid air.

Ja Morant takes some of the hype but Jaren Jackson Jr. is a problem.

After the Celtics went down by five points 27-22, Tatum knocked down a three at the end of the first quarter, and then proceeded to score the first four points of the second quarter to give the C's the lead. Over the past few weeks, bench scoring has become a huge issue for Boston, one even more glaring than the perceived big man issues that everyone seems to focus on. But against the Grizzlies, the Celtics got a nice boost from their bench early. Semi Ojeleye, Brad Wannamaker, and Enes Kanter combined for 15 points on 7-10 shooting, and really picked up the offensive load the team was missing without Brown in lineup.

Despite the nice effort from the bench, the Grizzlies went on an 11-2 run to open up a a 7-point lead. But thanks to two Theis three sandwiched around on from Tatum, Boston jumped right back in front. Theis added a nice offensive punch in the first half, and was able to stretch the floor as well, going 3-3 from long range as Valanciunas and the Memphis defense left him wide open beyond the arc.

The Celtics continued to dominant as the second quarter ended. Boston finished the half on a 23-2 run, thanks in large part to 16 second quarter points from Tatum, a number of deflections/steals/blocks (12 steals/blocks in the first half), and a few razzle-dazzle plays from Smart, like this one:

Grizzlies haven't scored since the 6:53 mark of the second quarter. Nearly a six-minute drought.

As was the case against the Lakers on Monday, Brad Stevens shortened his bench in the first half. Only eight players played meaningful minutes, although Javonte Green got five minutes off the bench late in the second. Stevens might be trying to shake things up or just could be getting as many minutes to his best players, but whatever he's doing, it's been working for the last six quarters.

The Celtics continued their run in the third quarter, outscoring the Grizzlies 29-10 over the first eight minutes. Boston's defense continued to give Memphis fits, and the C's were out and running in a way we haven't seen in a long time. After having been cold on offense in the first half, Hayward caught fire in the third quarter. He knocked down a few threes and had a LOUD dunk in traffic partially over Jackson Jr. With two minutes to go in the third it was a 30-point lead, and the rest of the game was glorified garbage time.

While the big lead was fun, it did come at a price:

Jayson Tatum has a right groin strain and will not return, per the Celtics.

Tatum had been fantastic up until this point, and we can only hope that he was held out for the rest of the game as a precaution and because the game was in hand. (Tatum did return to the bench with a wrap on his leg early in the fourth quarter. He was walking with a bit of a limp, though).

Tatum, groin strain and all, led all scorers with 23 points, Theis added 14 points, and Smart/Hayward both had 12. Valanciunas paced the Grizzlies with 16 points and 13 rebounds, and Jackson Jr. added 13 points. Rookie sensation Ja Morant was held to just two points on 1-5 shooting.

The Celtics will be back in action on Friday when they start a 3-game road trip against the Orlando Magic. They will look to (hopefully) have the services of their two dynamic young wings at some point during the trip.