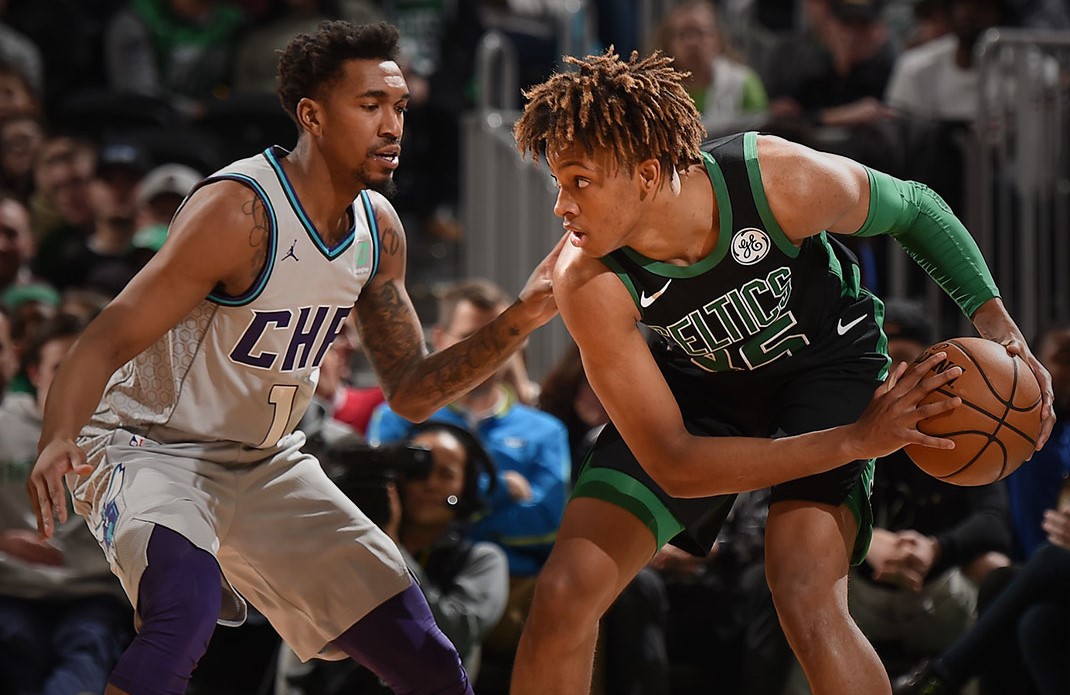 The Boston Celtics win their third-straight game with a 119-93 defeat of Terry Rozier and the Charlotte Hornets. What was a back-and-forth game quickly got out of hand once Jayson Tatum (39pts, 12reb) got warmed up in the second half. Tatum erupted in the 4Q, posting 22 of his career-high 39 points to help the Celtics pull away for good.

Kemba Walker immediately shook off any weird funk he had from Friday night by pouring in a quick five points for Boston. As usual, Tatum and Jaylen Brown were doing their part as well, chipping in with eight points and seven points, respectively. However, on the defensive end, they were struggling to maintain Charlotte's shooting.

The Hornets opened the game with an array of three-point shooting. The club converted on their first four of five attempts from deep, three of which were courtesy of second-year player Devonte' Graham. The Hornets guard has been having a massive year, and he quickly introduced himself to the TD Garden crowd by hitting back-to-back threes to start the game and five total treys in the quarter.

Miles Bridges also got off to a quick start for the Hive. The undersized big man displayed his versatility by knocking down a three, getting some hoops off the dribble, and converting on an and-one post-move to rack up 10 points in less than seven minutes of the game. Bridges and Graham combined for 19 of Charlotte's 23 points and helped them open up an eight-point edge.

Boston big man Enes Kanter went on a 4-0 run by himself to provide an answer for the Celts and help the rest of the offense get going. The second-unit did a very solid job of keeping the scoring alive, including Javonte Green with this athletic dunk:


But once again, Graham and the Hornets used lights-out three-point shooting to put some big numbers on the board. They cashed seven of their ten 3pt shots and ended up shooting better from three (70%) than from the field as a whole (61.9%). Graham finished the first frame with 17 points and his team up by seven.

Romeo Langford had some awesome minutes off the bench for the Celtics. At the 7:00 mark of the quarter, the 20-year-old rookie had scored half of Boston's ten points, including the first three-pointer of his young career.

Still, the Celtics and Hornets exchanged buckets throughout much of the quarter. Charlotte center Bismack Biyombo went 4/4 for his first eight points of the game to keep the pace with Langford and the Boston offense.

As time went by, the law of averages took into effect, as Charlotte's shooting finally cooled off. After seven 1Q threes, they went 0-4 in the second and saw the Boston defense leave less space for open shooters. Charlotte scored 18 fewer points in the quarter than they did in the first.

While the Celtics may have been doing a better job containing the attack, they still weren't forcing turnovers. The Hornets had just a pair of turnovers in the half, limiting transition points and making the Celts earn their buckets in half-court sets.

With Walker back in the lineup, beating them in the half-court is exactly what the Celtics did. Kemba sliced up the Charlotte defense, making more plays and helping the Celtics close the gap on the scoreboard. Grant Williams, coming off his career night against the Pistons, continued his impressive play across the board:


A late Walker three saw Boston retake and hold onto the lead into the half.

Neither team could pull away in the early parts of the third, as both units continued to exchange points. For Boston, Semi Ojeleye put together a nice stretch in the third with five points and some impressive defensive stops. Langford also built on his career-high points with his second three of the game:

Ojeleye and Langford combined for half of Boston's points through much of the 3Q.

It wasn't until later in the frame that the Celtics started to create some separation. Walker knocked down a pair of threes and helped the offense get some momentum. As the Hornets shooting fell below average, the green team was able to take a larger lead into the fourth.

Jayston Tatum, who quietly put up 17 points through three quarters, absolutely took over the final frame.

The forward put up six points in two minutes to really crack this one open -- Boston went on an 11-4 run to start the quarter that gave them a 14-point lead, but Tatum still wasn't done. At that point, the 21-year-old's microwave badge was all the way on. He scored another ten points, to give him 16 4Q points in a matter of five and a half minutes! For the icing on the cake, Tatum hit and and-one layup and one more trey later in the quarter to cap off a 22-point quarter and a career-high 39 total points:


Tatum's scoring eruption allowed the Celtics offense to feel very comfortable -- so comfortable, that they were throwing lobs in the half-court set...


...and of course, were able to get some exceptional Taco Time!


Boston wins a fun one at the Garden.