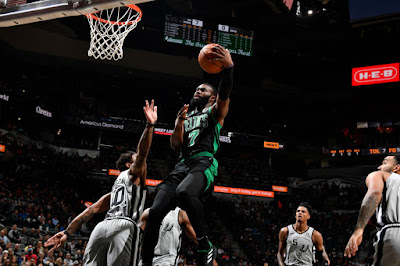 The Boston Celtics completed a perfect roadtrip by beating the San Antonio Spurs 135-115, behind JB’s 30 points and Time Lord’s hustle.

The first place Boston Celtics continued their road trip against a 5-3 San Antonio Spurs. The first half was watermarked with solid all-round defense from Boston. Already an outstanding defense in the league on the short sample-size season, Boston shut down 7-time all-star LaMarcus Aldridge, who scored just 1 point in the half. The Celtics held the home team to 36% shooting from the field in the first half, despite a late spurt of threes in the second quarter.

On the offensive end, Jaylen Brown was on the attack early and continued his stellar play at AT&T Center, where he dropped 30 less than a year ago. Brown, a recent beneficiary of a big contract, displayed his versatility and athleticism with the ball in his hands with an aggressive approach that got him to the line 8 times in the first half. He finished the game with 30 points.

The rest of the men in black and green also stepped up to help the Celtics to an early advantage. Every starter hit a three in the first half and Marcus Smart led the charge beyond the arc, going 4-9 from deep in the first half. Boston went into halftime up 18. The only bad news came from Gordon Hayward, who left the game in the second quarter with a left hand fracture, caused by a LaMarcus Aldridge pick.

The Celtics had no issues holding their lead in the second half. To nobody’s surprise, Kemba Walker’s all-round play came to fruition on the stat sheet in the second half. He finished with 26 points, 8 assists, 5 rebounds, and a block and a steal just to stay in shape. Walker’s leadership on both ends of the ball continues to pay dividends in building team chemistry on the court.


Perhaps the surprise star of the night in his 22 minutes on the court was Robert Williams III. Checking in every time a Spurs run needed to be stymied, Time Lord made his presence felt in style. He finished the game a perfect 5-5 from the field, 7 rebounds, and 6 blocks, including a highlight reel play in which he ran the floor to lead a fastbreak.

The Celtics are headed back home for a pair, still atop the Eastern Conference standings. They tip off next Monday at 7:30 PM against one of the best dynamic duos in the league, Kristaps Porzingis and second-year phenom Luka Doncic.