NBA players apparently are upset with Daryl Morey for potentially costing them millions of dollars due to his human rights tweet concerning Hong Kong. Apparently LeBron thinks Morey was only thinking about himself with the tweet (Note to LeBron: Decent chance he was also thinking about people in Hong Kong).

LeBron James on if Daryl Morey should be reprimanded for his tweet pic.twitter.com/6hCE8vCyNn
— Mark Medina (@MarkG_Medina) October 15, 2019

Let me clear up the confusion. I do not believe there was any consideration for the consequences and ramifications of the tweet. I’m not discussing the substance. Others can talk About that.
— LeBron James (@KingJames) October 15, 2019

He probably follows you on Twitter and felt like this was good advice. pic.twitter.com/EiaHcqdiDZ
— Matt Whitlock (@mattdizwhitlock) October 15, 2019

Well there you have it. Easy to stand up for social justice and human rights when it's not going to affect you negatively. But if it means having one less house, or car, or boat, well then I guess people should keep their mouths shut.

Please spare me with future accolades about how LeBron is all about just causes. He's no trailblazer. He's no Jesse Owens, Jackie Robinson, Muhammad Ali, or Bill Russell. He's a business man who wants to make as much money as possible. While during Michael Jordan's day the financial prudent strategy was to stay out of political issues, in modern times it can help you financially to promote yourself as an advocate for social justice and human rights. Being socially conscious is part of modern athletes' brands and makes them money.

Maybe LeBron really cares about the issues he fights for. I don't know him personally, so it would be unfair for me to say he's full of it. But today's comments make him simply look like a hypocritical businessman only looking out for himself. Sounded like he was telling Morey he needs to "shut up and dribble."

Celtics center Enes Kanter didn't address LeBron by name, but judging by his Twitter account, he didn't seem to be a fan of James' comments: 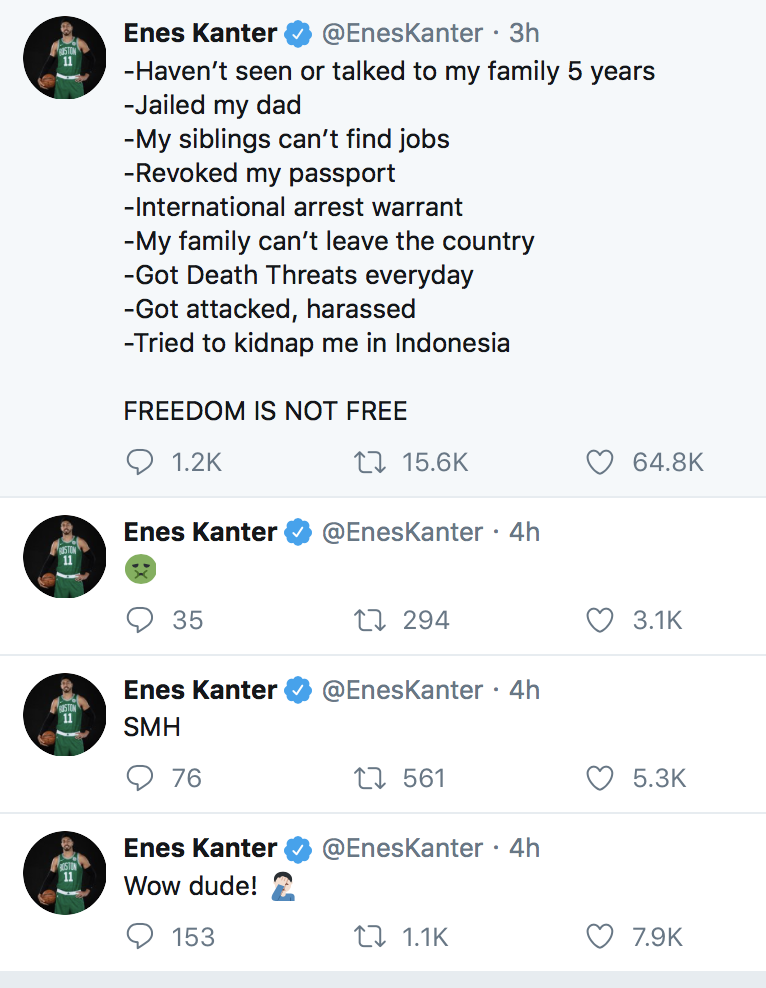