Bill Russell in a Mystical and Motivating “Zone” 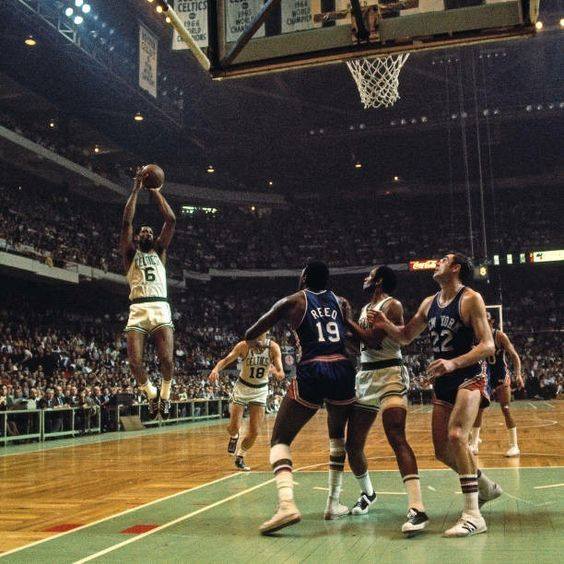 “Winning isn’t everything. It’s the only thing.”

Those famous words were uttered by a grizzled old Hall of Fame football coach – just not the one that has instinctively popped into your mind.

Born a couple of graduating classes ahead of that Lombardi guy, Henry Sanders was a two-sport athlete at Vanderbilt back in the “Roarin’ ‘20’s” before embarking on what would be a near-30-year coaching career. After scuffing through the Great Depression working as an assistant and prep coach, Sanders returned to his alma mater, where he still ranks No. 1 in all-time winning percentage (.617) for the school’s long tenure as a member of the rugged Southeastern Conference. 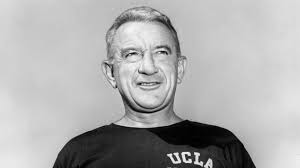 In 1949, Coach Sanders took his talents to UCLA, where his undefeated Bruins would be crowned National Champions in 1954. The original Wizard of Westwood is reputed to have used the now-famous expression first during a presentation at a physical education workshop in 1950 – and the words live on in an old Sports Illustrated feature story hyping the 1956 Rose Bowl.

And by the way, Coach “Red” – no shit!! – Sanders was no one-hit-wonder when it comes to verbal hyperbole. Regarding his squad’s cross-town rival, he once said, “Beating ‘SC is not a matter of life and death, it’s more important than that.”

In a fittingly Hollywood narrative, 53-year-old “Red” Sanders was struck down by a fatal heart attack in the late summer of 1958 – in an LA hotel room and in the company of what then would have been called a woman of ill-repute. (The UCLA folk wasted little time re-conferring their “Wizardry” on that Wooden fellow.)

Last word on Coach Henry “Red” Sanders – his given middle name was Russell.

Big Bad Bill in “The Zone”

Bill Russell is universally acknowledged as the most consistent winner in the history of team sports … but I’m doubtful Bill would buy totally into the Sanders/Lombardi philosophy of winning.

Certainly Russ was as “driven” to succeed as anyone, but he seemed to impose an additional stipulation upon a truly fulfilling victory – that added requirement being a “worthy” foe.

Every so often a Celtic game would heat up so that it became more than a physical or even mental game, and would be magical … To me, the key was that both teams had to be playing at their peaks, and they had to be competitive … It usually began when three or four of the ten guys on the floor would heat up … we’d all levitate … and there’d be a natural ebb and flow that reminded you of how rhythmic and musical basketball is supposed to be … I’d actually be rooting for the other team. When their players made spectacular moves, I wanted their shots to go into the bucket; that’s how pumped up I’d be.


But these spells were fragile …. Once a referee broke a run by making a bad call in my favor, which so irritated me that I protested as I stood at the foul line to take my free throws.


I always suffered a letdown when one of those spells died, because I never knew how to bring them back; all I could do was keep playing my best and hope. They were sweet when they came, and the hope that one would come was one of my strongest motivations for walking out there.


With about five minutes remaining in Bill Russell’s Last Hurrah (Game 7, 1969 Finals), long-time friend and rival Wilt Chamberlain left the court with a gimpy leg, never to return. The player-coach’s final title was closed out against former teammate Mel Counts.

For my own selfish reasons, I was offended the instant Wilt left the game … We were close – oh, so close – to finishing with a great game … “Oh, man, don’t do that. Don’t leave … This is my last game. Make me earn it. Come on out here” … My anger at him that night caused great friction between us later. I couldn’t control it, even though I realized Wilt had no way of knowing how special that game was to me, and that in any case he had no obligation to care. 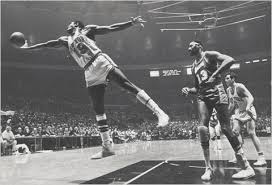 For some reason, the friction for which Russ seems to accept blame here in his 1979 memoir Second Wind would proceed, allegedly quite icily, for another decade or so.

An overlooked irony in NBA history is that Chamberlain did indeed seriously injure a knee just six games into the following season and underwent a major surgical procedure … but in a baffling and unprecedented recuperation, the Big Guy was back on the court before the end of the regular season.

Funny that the enduring memory from that 1969-70 season is Willis Reed’s inspirational return to the line-up for the champion-to-be Knicks in Game 7 of those Finals – against Wilt’s Lakers (and, not-so-coincidentally, a new coach).