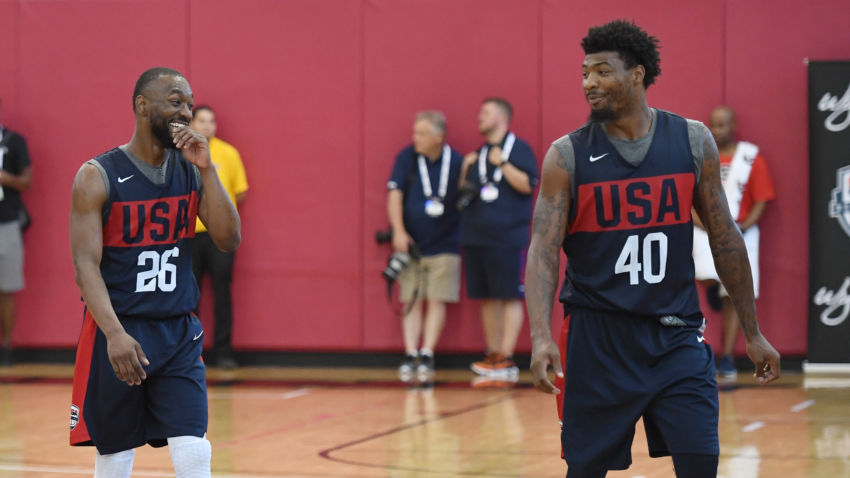 There has been a lot of Celtics buzz surrounding Team USA this month for obvious reasons. It’s no secret the Boston Celtics are well represented, as Kemba Walker, Marcus Smart, Jaylen Brown and Jayson Tatum are hopeful to make the 12-man team that is looking to qualify for the FIBA World Cup.

It’s been great to see the smiles, practice clips, and reports of early team bonding from the Celtics four. But as the Team USA players ramp it up sooner than their counterparts at home getting ready for their upcoming season, there is always risk for injury. The risk for injury is always real regardless of where they are practicing or playing, but NBA franchises that have players representing their countries are certainly holding their breath.

Celtics players seem to be having some fun at practice for Team USA...and a lot of media time for Kemba Walker 😂🏀📸 pic.twitter.com/BV7bQYmzj9


Marcus Smart needed to take time off the court in day two of the team’s workout to manage ankle soreness. When the news was circulated, Celtics’ brass and fans had their stomach drop a bit. The goal for these players to qualify and come home in one piece. Luckily for Marcus and the Celtics, this was just a precautionary measure.

Marcus Smart steps out of practice with team USA due to sore ankle.https://t.co/QJAP5PgaAm pic.twitter.com/U0jEeY6XND

Chris Forsberg of NBC Sports Boston is doing a great job of following the Celtics in camp right now, and he and his team were able to get some quotes from Smart that should ease the concern:

"Just kinda taking a precautionary option right now,” said Smart. "It’s only Day 2 so you don’t want to push anything and do anything stupid.”

"I will be out there,” said Smart. "Like I said, just a little sore today. Go get the treatment on it, precautionary reasons. We got a great training staff here and they’re going to do a good job of making sure they get me back out there.”

In typical Marcus fashion, he expects to be on the court for their workout today. It’ll be nice to see the Celtics well represented for Team USA, but not at the expense of their regular season.

Again, the risk of injury and wear-and-tear is a concern for these players. We’ve seen a lot of U.S. players drop out of the tournament for different seasons, and this clip from Adrian Wojnarowski’s podcast of CJ McCollum describing why he dropped out is pretty interesting.