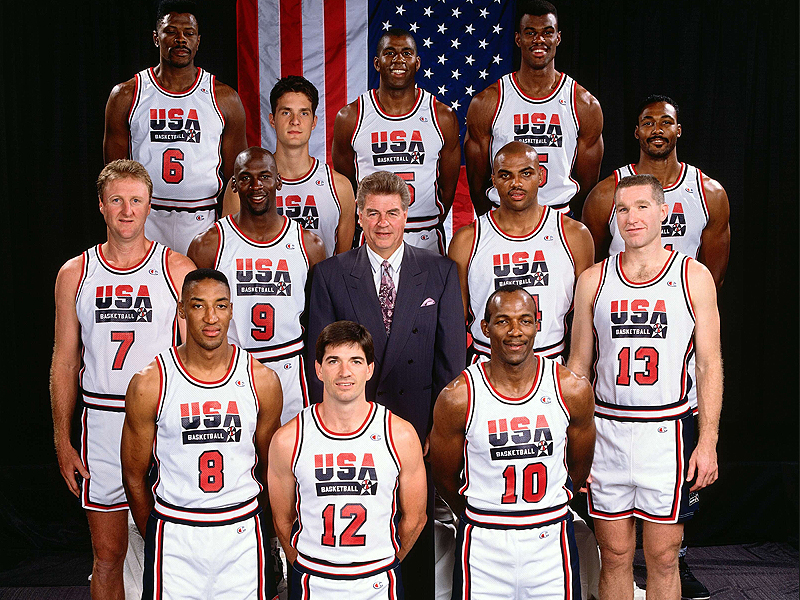 Twenty-seven years ago, the Dream Team took home the gold medal in Barcelona at the 1992 Olympics. The team was equipped with eleven Basketball Hall of Famers. They lapped the field as they outscored their opponents by 350 points total.

The only player that didn’t make the Hall of Fame from that team was Christian Laettner, who didn’t have as bad a career as I remember. Look it up. Team USA has gone on to roster many generational players since 1992 as well.

There have been only two players that wore the red, white and blue in the Olympics from 1992-2016 that didn’t make an NBA All-Star team in their career (Emeka Okafor; Harrison Barnes). The group of players is extremely impressive.

Considering just the players that played for Team USA in the Olympics from 1992-2016, I tasked myself with constructing the best 12-man roster for the Ultimate Dream Team. As part of the criteria, this roster will have players that played in Olympic games only. Other FIBA World Cup tournament teams were not considered.

Michael Jordan - The inclusion of the GOAT is a no-brainer. He would be considered the captain of the squad; boasting six rings, 14 All-Star appearances, 11 All-NBA selections, a 10-time scoring champ, a 9-time All-Defensive player, and five MVP honors. His Airness would be etched into a starting guard spot tasked with guarding the toughest assignment on the opposing team, while also being able to get a bucket whenever the team needed as his 30.1 career points per game would suggest.

Earvin “Magic” Johnson - This do-it-all player can play anywhere on the court, but Magic would run point for the Ultimate Dream Team. The five-time NBA champ and ten-time All-NBA selection would run the fast break to perfection like he did for the 1983-84 Lakeshow when he averaged a whopping 13.1 assists per contest.

Kobe Bryant - Like Magic, Kobe has enough jewelry to fit all the fingers on one hand. He’s the most-similar to Jordan that we’ve seen, and his resume speaks for itself. The 18-time All-Star and 12-time All-Defensive player is a menace on both ends of the court that would assume a key reserve role on this squad.

Allen Iverson - The Answer was one of the last players to make this squad. He will be the only player to not win an NBA championship on the Ultimate Dream Team. He did carry the 2000-01 Philadelphia 76ers to the NBA Finals on the back of his stellar MVP season where he averaged 31.1 points per game. The eleven-time All-Star also led the league in steals three times and in scoring four times. Having a volume scorer on the team gives him the nod, as he will be called upon to come into games to shoot and score unconsciously in short bursts.

Ray Allen - Although Ray is not listed as an all-time great like his guard teammates, every team is best equipped with a dead-eye shooter. He was a key contributor to two championship teams. In his prime Ray could score from anywhere, but he is on this team due to his career 40% shooting from three. If Stephen Curry had been able to play for Team USA in the Olympics, he would be a more likely choice here. Ray wouldn’t assume many minutes on this loaded roster, but when the team needs a clutch three, you can bet he will get his number called.

Dwyane Wade - Flash was probably the most difficult to leave out, but the 13-time All-Star and three-time NBA champ was pushed out by Iverson’s elite scoring ability and Allen’s elite shooting ability.

John Stockton/Gary Payton/Jason Kidd/Chris Paul - Not including a true point guard was difficult, especially since this group includes great defenders and facilitators, highlighted by Stockton being the all-time assist leader.

James Harden/Russell Westbrook - The re-acclimated teammates are extremely talented and could find themselves on this team if they are able to finish up their career with a championship. These stat-fillers are a difficult cut because of their ability to fill an important role.

Reggie Miller - The Knick Killer was a consideration for his shooting ability, but Ray edged him out as an overall better resume.

Mitch Richmond - This five-time All-NBA player is often overlooked. He also competed with Allen for the shooters role, but Ray’s career 40% from three edged out Richmond’s 38.8%. And Ray was more of a contributor for his championship rings than Mitch was for his ring as a bench player for the Los Angeles Lakers in his final season.

LeBron James - LBJ will end up comfortably in the top-five of all-time. He has filled up the stat sheet throughout his career (27.2/7.4/7.2 career averages) and could fit any role on the Ultimate Dream Team, including point-forward. He has been named as the league’s most valuable player four times even though he can be argued for the honor every year. The 15-time All-Star has big game experience as well, playing in nine Finals, winning three.

Larry Bird - Larry The Legend is another all-timer who will carve out an important role on this team. He can score from anywhere (24.3 career points per game), including from deep, while facilitating (6.3 assists per game), rebounding (10.0 rebounds) and making the right play for any club he’s on. The three-time champ also has three MVPs on his resume. He tacked on 12 All-Star appearances, 10 All-NBA teams, while being no slouch on defense (two-time All-Defense).

Kevin Durant - Say what you want about KD, but he can flat out score and that’s what he’ll be asked to do here. He’s a near seven-footer with guard abilities. He has led the league in scoring four times and has all the offensive tools in his bag. He’s been All-NBA nine times and was the Finals MVP in both of his championship wins.

Scottie Pippen - Playing Robin to Jordan for most of his career does not hurt Pippen’s consideration here, but he just doesn’t have the robust numbers of the other players. Although they play different positions, I went with Iverson’s scoring rather than Scottie’s defensive prowess (ten-time All-Defense).

Carmelo Anthony - It could be argued that Melo was a better Olympian than he was NBA player. He needs to be considered as an option of the bench for this team because he is one of the best scorers of his era, but Durant is better at more things than Melo is.

Grant Hill - Although Grant has a long Hall of Fame career, his overall statistics and stamp on history would have been greater if he didn’t miss multiple years in his prime (he played just 47 games in his age 28-31 seasons). Great player, but with the talent on this team, Grant couldn’t make the cut.

Shaquille O’Neal - The Diesel gets overlooked as one of the best big men of all time. He was un-guardable for a large stretch of his career, proven by his 14 All-NBA teams and a key cog on four championship teams. He has an MVP award under his belt, and averaged 23.7 points and 10.9 rebounds over his 19-year career.

Hakeem Olajuwon - The Dream has a perfect nickname for the Ultimate Dream Team. Known as one of the most skilled big men the game has ever seen, he led the league in rebounds twice, blocks three times, and has a career points per game average of 21.8. The two-time champ was an All-Star twelve times and has an MVP trophy on display.

Tim Duncan - Speaking of under-the-radar bigs, The Big Fundamental was one of the best big men of his era as a 15-time All-NBA selection and 15-time All-Defensive player. The five-time NBA champion handled his business with no flash, but he did his business as a walking double-double, averaging 19 points per game for his career while adding just under 11 rebounds per contest.

Kevin Garnett - ‘Anything is possible’ for The Big Ticket, including his inclusion on this team. The 2007-2008 NBA champion also has an MVP honor under his belt. The 15-time All-Star would anchor this team’s defense as evidence as a 12-time All-Defensive player with a Defensive Player of the Year award from his championship season. Although KG averaged the least amount of points per game (17.8) of anyone on this roster, he expects to earn minutes as a stretch five-man or the only traditional power forward on the roster.

Karl Malone - Outside of Wade, The Mailman is probably the toughest omission on the roster. He may be the best power forward of all-time. He is a 14-time All-NBA player and two-time MVP with career averages of 25 and 10. What eluded him, however, was that championship ring. It isn’t part of the criteria to be included on the roster, but KG pushes him out due to his versatility and ability to play both the power forward and center position.

Charles Barkley - The Round Mound of Rebound was an 11-time All-NB performer that also added a MVP in 1993-94. Like Malone, he yearns for the elusive championship. Sir Charles averaged double-digit rebounds in every year of his career except for his rookie year while adding in 22.1 points per contest throughout his career. Often overlooked due to his television personality nowadays, Barkley was a true all-timer than narrowly misses the cut here.

David Robinson - The former two-time NBA champion also has ten All-NBA honors. The Admiral was a great two-way player (91-92 DPOY; averaged 29.8 ppg in 80 games in 93-94) and is another tough omission from the final roster. His legacy remains in-tact as a member of the 1992 Dream Team, however.

Patrick Ewing - Like the other three big men omissions, Ewing was part of the Dream Team in 1992. He misses the cut here, not due to his 21 and 10 career averages, but because of the others ahead of him. Ewing also couldn’t secure that championship like Malone and Barkley. No shame in not making the final roster in a team riddled with first ballot Hall of Famers.

To summarize, this is how I see the Ultimate Dream Team from 1992-2016 Team USA Basketball Olympians shaking out (starters italicized):

Dream Team photo courtesy of usab.com
All statistics and accolades courtesy of basketball-reference.com