Dwight Howard denies rumor he is gay; Kendrick Perkins responds he should "man up and don’t lie about it!"

Over the past couple months former Celtic Kendrick Perkins has posted several informative and/or entertaining tweets, so he has become a must read, but this evening his comments on Dwight Howard addressing rumors about his sexuality by responding “I’m Not Gay" were a bit odd.

Yes I do. Let’s just sit back and wait to see who or if he sign with anybody. Listen GMs don’t want any distractions in a locker room especially from a Vet. Culture is everything now a days in the NBA!
— Kendrick Perkins (@KendrickPerkins) July 16, 2019

Was Perk saying that Howard shouldn't lie about his sexuality, but then also saying teams would be weary of signing him because it would be a distraction? That would mean he's advising Howard to say he's gay even if it means he doesn't get another NBA contract.

Or the alternative is Perkins was saying that Howard lying about his sexuality would be the distraction. This would imply Perkins thinks or knows Howard is gay and the lying is the issue?

Neither of these options sound very fair to Howard or gay athletes in general. Hopefully Perk clears this up, as it could be construed as rather Tim Hardaway-esque. Hardaway of course lost his job in 2007 covering the NBA after his comments about not wanting gay players in the locker room. Let's be clear here, Hardaway's comments were much more vile it should be stated as Hardaway point blank said he "hates gay people."

Stephen Jackson this past November also more or less said that homosexuals don't belong in men's professional sports because they make their teammates uncomfortable, but no one seemed to care and he is still all over TV on popular sports shows.

Personally (and I'm not claiming Perk is doing this) I don't think it's very fair if people both complain when a celebrity announces his sexuality aka "comes out" (Typically the complaint is "Should I announce I'm straight?!), but then also criticizes a player for not "manning up" and just admitting they are gay. Seems like a no win situation.

And honestly even though I've never been a huge Howard fan as he was a rival in Orlando and Los Angeles, if he says he's not gay, who cares? He's not obligated to disclose his sexuality. Why not just believe him? And if he is gay, and wants to remain in the closet, so he can get a job in a profession that still has prejudice against gay coworkers, let him do that as well.


When the rumors came out this year I wondered is this why Howard seems to be so disliked in locker rooms in the NBA? If he was gay and that was the reason, that would be really shitty on NBA players' parts. It's been over six years since Jason Collins came out as gay. Collins had a cup of coffee with the Nets, but then his NBA career ended. No other player has come out since then.

Perkins is pretty much universally loved by Celtics fans, so again hopefully he clarifies his comments, as on their face they are disappointing. We can love Perk, but still disapprove of him telling someone they need to come out. It's not his place to decide when or if someone should come out.

Update: Perk has in fact clarified his comments to state again that he has no issues with gay people (never thought he did), but that GM's would be weary of signing a gay player because of the distractions. If this is the case then that's a sad state of affairs for the NBA. Also it still doesn't make sense why Perk would say GM's would stay away from gay players, but that he thinks Howard should "man up" and not "lie about it (being gay)!" So it appears Perkins is advising Howard to come out of the closet and say he's gay (even though Howard has denied it) even if it means he never will be able to sign another contract because NBA GM's won't want him any more.

Listen I’m just telling you the real. I’m not speaking for myself Because like I said before I don’t care what that man do with his life but if you put him in locker room it will be guys whispering and talking about him and that situation. It’s the truth and it’s no way around it
— Kendrick Perkins (@KendrickPerkins) July 16, 2019

Listen I have gay family members that I’m cool with it and that I love dearly! Your missing the point here. GMs look at things like this. Period! Sorry but it’s the truth
— Kendrick Perkins (@KendrickPerkins) July 16, 2019

I believe Perk that he doesn't care if Howard is gay. He obviously thinks he is (or has a strong suspicion. Don't want to out words in his mouth) thus his initial tweet. And in reality Perk tweeting this stuff out should make it clear to everyone that this is still an issue in the NBA. It's no coincidence that no player has dared to come out since Collins six years ago. Actually not just come out. Players have to still deny rumors. It's not just announcing your sexuality. It's the attacks due to rumors. 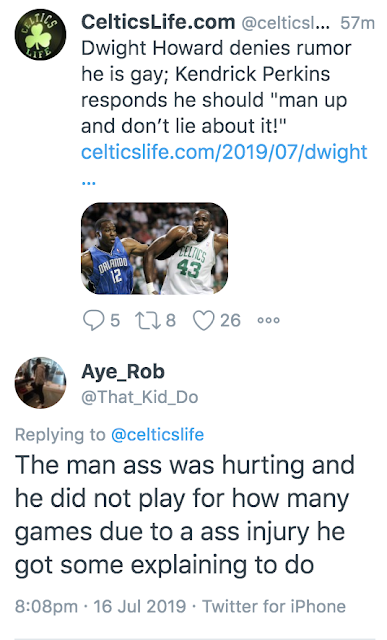 When people respond "Who cares?" It's stuff like this every day which forces Howard to address the rumors. The people that send hate tweets definitely cared to harass Dwight. https://t.co/ZxeOi8X2tl
— CelticsLife.com (@celticslife) July 17, 2019

It's stuff like this why players shouldn't be told to "stop lying" and just come out.