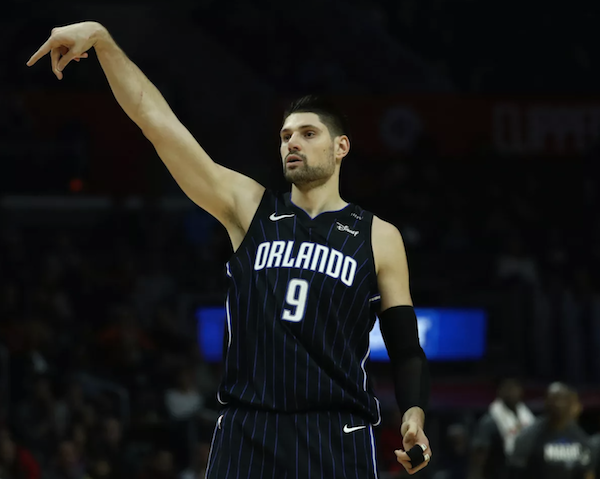 After drafting Romeo Langford and trading away Aron Baynes, the Celtics are in for a busy summer. Live from the Barclays Center, our @ShamsCharania has the latest on Boston's plans, including their interest in Nikola Vucevic. pic.twitter.com/cutfL9Ku4j
— Stadium (@Stadium) June 21, 2019

We wrote on Vucevic as a potential Celtics FA target the other day: https://t.co/HJbtzi7mSj

Woj says he can see the Celtics and Lakers pursuing him if he can't work out a deal with ORL pic.twitter.com/yy2wF8DYbi
— CelticsLife.com (@celticslife) June 21, 2019

Woj mentioned the Celtics likely interest in Nikola Vucevic towards the end of the ESPN broadcast and Shams Charania is collaborating that report, so it's pretty concrete. If you are one of the Celtics fans that complained about Al Horford not putting up big numbers, you'll enjoy Vucevic's loftier numbers (21 and 9 last season). Now we know Horford helps teams win. Vucevic didn't have a very strong track record until this season when he lead the Magic to a surprising playoff spot. He struggled mightily vs Marc Gasol's defense in the playoffs though. Small sample size, so who knows.

I like Vucevic as a potential get, but worry his 2018-2019 season may have bumped up his price tag too much. He's 28, so younger than Horford, but still a little older than the Celtics should want if they are building around the Jay's.

Another option for the Celtics in my opinion is to punt on competing this upcoming season. Use the cap space to take on some bad one year contracts and get draft assets for your troubles. Let all the young guys show their stuff this year, pick up another lottery pick likely from missing the playoffs and then use the cap space to contend again next summer.

More on Vucevic as an option: With Al Horford potentially gone, is Nikola Vucevic an option for Celtics?
Cs may reach $35m cap after trading Baynes, renouncing Rozier