In a previous article, I mentioned Marcus Smart's quote, "Off-season is a myth!" There is no off-season for the true NBA professional. It is the time to work on your weaknesses - and fears. Yes, fears. The Celtics obviously have chromophobia - an irrational fear or aversion to colors found in the painted area of the court. 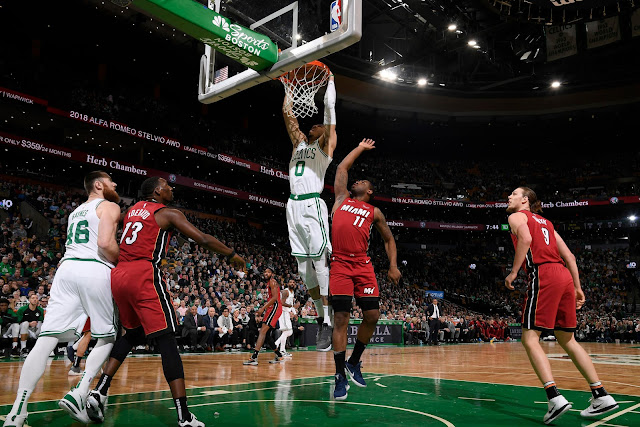 Kawhi Leonard (26 PTS) handles and finishes in the paint!#WeTheNorth 76#StrengthInNumbers 83

Love this and am honored and appreciate all the love and votes. Thank you!

I want a banner though. Offseason is a myth. Let’s get it! 🔥☘️ pic.twitter.com/uSCIVdsHYE

Jaylen Brown, Jayson Tatum and Gordon Hayward all need to work on their strength this summer. Driving into the lane, taking hits and getting up a good shot takes strength and handles. Hayward averaged only 2.54 FT attempts - Brown had 2.80 - and Tatum averaged 3.03. Not good enough. They have no aversion or fear of the tan-colored hardwood, but any portion of the floor with color? They avoid it.

Fouls don't occur often beyond the arc. No defender wants to give an opponent a shot at a 4-point play. Driving into the paint can be hazardous. But it has rewards. Racking up fouls on the opposition. Chances for 3-point plays. Brief breathers when the foul shots are taken.

A number of our readers have broached the idea of Kevin Garnett coming to Boston to tutor Rob Williams. I would also bring up the idea of Paul Pierce instructing the Jay Team on driving into the paint. At very least, Jaylen and Jayson should watch tape of The Truth attacking, and not fearing, the colored area. The Captain averaged as many as 10.3 free throw attempts per game (2005-06 season). Color is not to be feared, particularly the green area of the TD Garden floor.