T. J. McConnell on Isaiah Thomas - "One of the most unguardable guys I've played against"


An argument can be made that former-Celtic, Isaiah Thomas, is washed up. At 5'9" (at best), he never had NBA size, and post-surgery, he may never be the same. I am not making that argument - not yet. I won't be convinced he is washed up until I see him this season. The 76'ers T. J. McConnell got an embarrassing introduction to Isaiah on opening night in Boston in October of 2015. 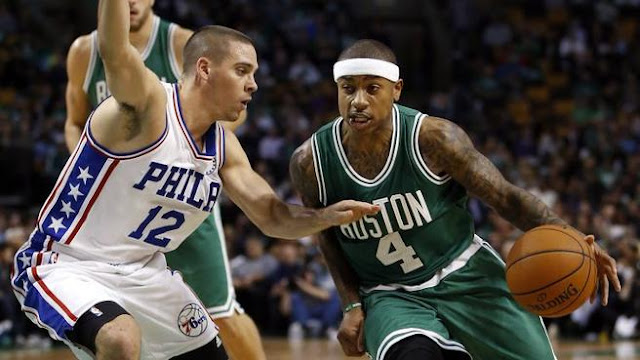 It was McConnell's debut game as a rookie. He had a decent Summer league and pre-season, but this was for real. And it was in Boston. According to ESPN's Adrian Wojnarowski on the Woj Pod, T. J. called it "one of the most embarrassing moments of my life" (per NBCSports' Dave Green):

"It was one of the most embarassing moments of my life, and one of those gut-check moments where Isaiah Thomas, in my opinion one of the most unguardable guys that I've played against, and you got a coach like Brad Stevens — they called a play as soon as I checked in and Isaiah came off, scored. I come back down, Boston brings the ball back down, I look over at Brad [Stevens] and he goes ‘Again.’

"And Isaiah gets someone a lob. We go back down, don’t score and I look over at Brad and he goes ‘Again.’ I'm like 'Oh, my goodness gracious.' And Isaiah scores again.

"I think I got subbed out after that and I was like ‘Welcome to the NBA.’"

That’s my dude!!! One of the most genuine guys I’ve ever played against https://t.co/QGDtCPYRom

Boston fans saw IT4 at his best. He was virtually unguardable. Despite his flaws on defense, he more than made up for it on offense. Can he do a repeat this season. I hope so. Unless the hip injury and surgery hamper his play, there is no reason he can't make a comeback. He has defied the odds in the past. I believe he can do it again.