Making sense of tonight's draft lottery from a Cs perspective


The Draft Lottery for the 2019 NBA Draft is tonight, and if you're a little confused about what's going on, get in line. 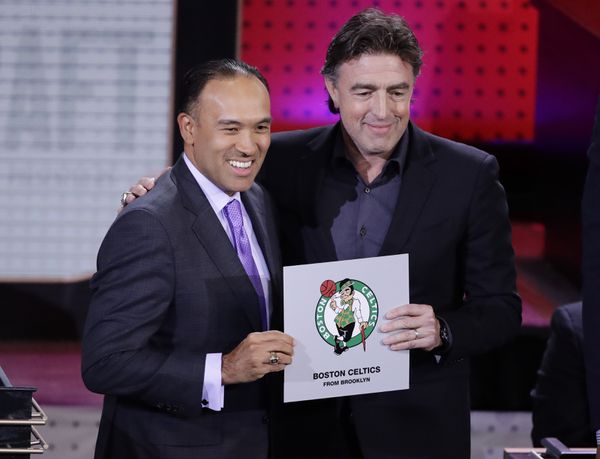 Many people, including otherwise-well-informed media members and pundits all the way over to casual fans find themselves facing a gap in knowledge when it comes to this event.

Conspiracy theories abound almost as ubiquitously as "good luck" appointments of lottery representatives for participating teams -- and if we're being honest, the latter is the more likely of the two to influence outcomes of the day.

There are no frozen envelopes; this whole exercise is done with ping-pong balls and one of the world's leading accounting firms, Ernst & Young, an organization whose entire business is built on being a trustworthy assessor for some of the world's most valuable companies.

While they act as a foil to any potential allegations of impropriety through their certification process, there are certain ranges we can reasonably assume each team's pick to land in through the use of probability and understanding the protections on certain picks.

As usual, @dsparks presents the world's best NBA draft lottery odds visualizations, in conjunction with our article on how the lottery works and each team's odds:https://t.co/bb8RJTY5Df pic.twitter.com/wgTMPi9Yoh
— Mike Zarren (@mikezarren) May 14, 2019


So, let's dive into the process of the draft itself in light of those delimiters, leaning on a most excellent article produced by the league, the NBA's Director of Analytics Davis Sparks, and a one Mike Zarren, a man who may be at the helm of the Boston Celtics some day, and our assistant GM now.

The Cs currently control their own first and second-round picks, which will fall at 22nd and 51st overall, as well as a pick from the Los Angeles Clippers, slotted in just ahead of Boston's at 20th overall. These picks will be taken by Boston or the team the Celtics trade them to, no matter what.

Boston will definitely get another pick to work with, but it's a little confusing, so bear with me. After trading back to take Jayson Tatum two drafts prior, Danny Ainge landed himself the pick we're discussing, which will come from either the Sacramento Kings or Philadelphia 76ers, depending on where it lands in today's lottery.

If it ends up being #1 overall, the 76ers will get it. Everything else, well, it then goes to Boston, and can be no worse than 14th (if you want to see a simulation of the ways this could break, check out Tankathon.com). 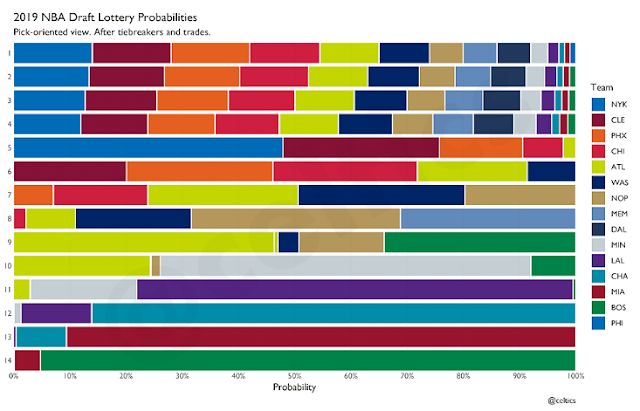 The Celts could also end up with a pick owed to them by the Memphis Grizzlies, who tried their best to ensure the pick is ninth or above to avoid its protections kicking the First to future seasons, where it will be top-six protected (2019-20) and then unprotected (2020-21). If you're confused about why they would do this to a pick they themselves protected, it's because their priorities changed drastically since trading it.

The Griz are likely looking at a two- to four-year rebuild, and hope to control their picks for the seasons they expect to be their worst, with few other options for teambuilding in a small market. Boston is hoping the lottery dashes their hopes and gives them a trade chip that could fall at least seventh or eighth overall if not higher, instead of a more lackluster ninth or tenth, the range it would likely end up in if it does convey this season.

As to the nuts-and-bolts component, this is the first draft under a new Collective Bargaining Agreement (CBA), which adjusted the odds so the four worst teams in terms of record all have equal odds at the top pick (that Boston does not want). It does give the Cs a slightly higher shot at the #2-4 pick, however, which would obviously be a welcome outcome after this most unsightly of seasons.

As for the process itself, I'll let Zarren himself break it down:

"14 ping-pong balls, numbered one to 14, are placed in a bin. It turns out that there are exactly 1,001 possible four-ball combinations when you have a set of 14. Each team in the lottery has been assigned a set number of combinations of any four of the balls, for a total of 1,000 combinations. (The 1,001st combination belongs to no team.) The number of different combinations assigned to each team depends on that team’s record; teams tied at the end of the regular season split evenly the total combinations allotted to their two (or three) positions, with one team getting one more combination in the event the total is odd. Then, an independent accountant, witnessed by a representative from each lottery team, draws four balls out of the bin, and whichever team is assigned that combination gets the first pick in the draft. (If it’s the 1,001st combination, the balls are replaced and drawn again.) After the first pick is determined, the balls are replaced, and the process repeated. If the new combination belongs to the team that already won the first pick, the balls are replaced and drawn again. The next different team whose combination is chosen gets the second pick, and then the whole process is repeated again for the third pick and fourth pick. After those four picks are set, the remaining teams are set to pick in inverse order of record, with ties being broken by a drawing that was held earlier in the season. The accountants mark down who gets each pick, and place a card bearing each team’s logo into an envelope bearing the number of that team’s pick. The envelopes are then brought out on stage, where they’re opened in front of a live TV audience, at which point we all find out where each team is drafting."

I could be paranoid, but I feel like the team's paid a karmic debt incurred, well, let's not go there right now, but we can say I feel the basketball gods will be generous with either a top-four pick or keeping Memphis under eighth overall, but the most likely outcome is the latter. The odds are we're holding the 14th, 20th, 22nd, and 51st picks of the 2019 NBA Draft.

At which point we can start to wreck our brains trying to decide what exactly Danny and company will do with them.