Gordon Hayward has been taking a lot of heat lately, and no wonder. He has been virtually a no-show in the last three playoff games. So the question is, are the Celtics looking at two more years of paying big money for little production or an All-Star who will come back in September at 100% of what we saw from him in Utah. 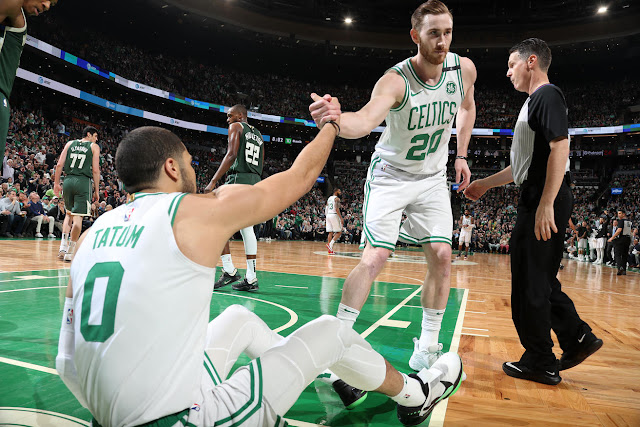 Brad Stevens said he’s “not doing a very good job” setting up Terry Rozier and Gordon Hayward for success. “I need to do a better job of getting us organized with both groups, but especially that second group.”

Fast-forward to now. In the Milwaukee series, he has been a shadow of what he was two years ago. The question is WHY. Is it the ankle still. Most likely, but I doubt that is a major factor. He is averaging roughly 30 minutes/game, but he is no longer the #1 focus on offense. He is option four, five or six, depending on how you look at it. Is Brad Stevens correct? Is he not doing a good job of setting Terry Rozier and Gordon up for success? Brad needs to get better with that. He has been slow to adapt to the changes within his own team.

There is hardly an NBA analyst in Celtics-Land that doesn't think there is a major disconnect among the staff and players. That will not be fixed in the short time remaining prior to tonight's Game 5. Gordon has been a victim of a serious injury and the disruption within the team, and he most-likely needs to take some blame with everyone else.

Hayward is owed $32.7 million next season and $34.2 million for 2020-21 - with a player option. There is little time for injury recovery in the regular season or playoffs, but the off-season may bring him back to 100%. Gordon relies more on basketball IQ and craftiness than elite athleticism and quickness. That may be in his favor if the injury persists somewhat.

So I don't view Hayward as simply a bad contract. If his recovery is close to complete as of this summer, Trader Danny Ainge could use that large sum in a trade of Hayward. Alternatively, a fully-healthy Gordon Hayward in the starting unit next season alongside the right pieces could work nicely. As I have previously written, this current Celtics crew is a bad mix - and it shows in many ways. I, for one, am optimistic about next season. My personal feeling is that both Jaylen Brown and Gordon have been adversely affected the most by the internal strife within the Celtics ranks. Ainge should find a way to cure that this summer.