Celtics future? - blow it up, stand pat - or take the middle ground


With the Celtics down 3-1 in the East Semis, chances of a Title this year are out the window. Don't get me wrong. They have the skills and talent to have gone all the way, but there is a something truly wrong with this mix. And I mean from the top to the bottom. 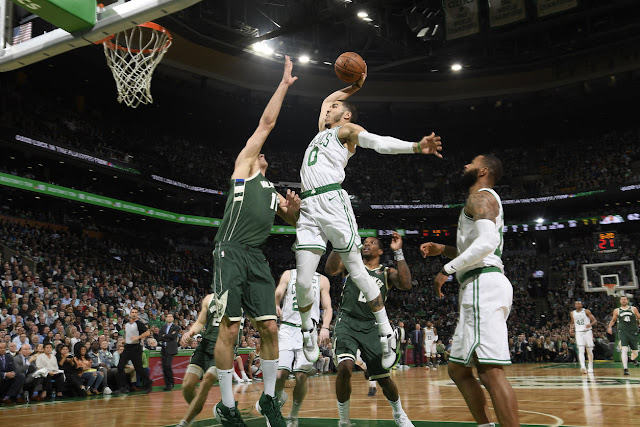 I'll never forget it. I was choosing my team for 5-on-5 pickup at the YMCA against a guy that had little idea of talent - or did he? When I gathered the other four players, the buzz was loud. "We've got this game." Guess what? We didn't. We lost. It was a bad mix despite the skill levels of our five guys. That's what we have with out current Celtics.

I can't get this out of my mind. The Celts were damn close to going to the Finals last year, and then we add Kyrie Irving, Gordon Hayward and Daniel Theis, and we are about to get eliminated, possibly in Game 5 of the East Semis. Doesn't make sense, does it?

So, what's the course going forward. Blow up the team - stand pat - or take the middle ground. The best solution to any problem often lies between the extremes. Brad Stevens has stated various reasons for not naming a team captain, but one that he omitted was that he didn't see the combination of talent and leadership qualities of past captains like Bob Cousy, Bill Russell, John Havlicek, Larry Bird or Paul Pierce. Kyrie Irving is supremely skilled, but he has not been up to the admittedly-difficult task of uniting this motley crew. The blame is widespread.

Kyrie Irving made an early exit Monday night. Now it looks like the Celtics will do the same. And an uncertain summer will arrive sooner than most expected. https://t.co/5vrmdOsljh

Most fans agree, as do I, that this team has flaws that needed fixing at the start of the season. Without having direct knowledge of specific clashes, the members of this team don't seem to mesh on or off the court. They blew big leads and lost. They got behind in many games and could not recover. Attempts at comebacks usually resulted in individuals trying to take over. And Stevens takes a stubborn position on certain aspects of the game.

We won't see this same group back next season. Danny Ainge's best move for his health may be to move aside or lessen his work load. I doubt he will do either. Danny loves to win, and he is very good at what he does - health be damned.

How about Brad? If he sees himself as part of the issues with the Celtics, he may go elsewhere. He had a hard time controlling the talent, youth and egos of this crew. There were obvious personality clashes that went beyond what we normally see.

How about the players? One of Ainge's best moves was to pick up the four draft picks from the Nets, and I truly believe that the three draftees from that mother load should remain in Boston. Marcus Smart and the Jay-Team (Jaylen Brown and Jayson Tatum) make for a solid, young core.

New: “I feel like we’ve been pretty soft.”
Old habits have emerged, and now the Celtics are one loss from seeing this confounding season come to an end. https://t.co/excky20lMO pic.twitter.com/0Ei1OBTj3R

Al Horford fits any situation - at the right price. But Ainge needs to find another skilled big man - and make sure his coach uses him. Gordon Hayward? Many now refer to him as simply a bad contract. I don't agree. He will work hard on his game this summer and be at least very close to what he was in Utah.

Now to Kyrie Irving. Leaving the court before the end of the game last night is perhaps an indicator that Kyrie has had it with at least some of his teammates - and maybe them with him. When asked why he walked off the court before games end, he responded, "The game was over." In the same post-game interview, Kyrie mentioned that the Bucks "feel good about themselves", possibly suggesting that the Celtics players may not.

This was not the end-of-season scenario Irving envisioned when he came here. He has been labeled by many as the toxic element in the Celtics mix, but I disagree. The mix as constituted simply doesn't work as well as projected. Time for some changes, but they don't need to be massive ones. One guarantee is that Danny already has a good idea of what needs to be done. Just don't expect to have him spell it out for us.