Almost lost a little in the collective sigh of relief we all exhaled after Dion Waiters missed a three that could have tied the game for the Miami Heat against the Boston Celtics late in the fourth quarter was the fact that Marcus Smart was awarded the Red Auerbach Award. 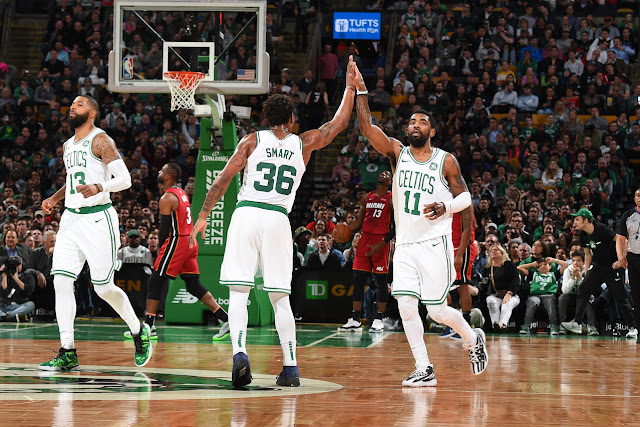 The setting, ironically, was actually very on-brand, as the undisciplined gunner that Waiters is now used to be something of a hallmark for Smart, who was once as well known for shooting the team out of winnable games as much as he was for the defense that made up for it and then some.

This season, Marcus has quietly transformed himself, becoming a fairly deadly shooter from deep (he's currently at .361 compared to a career 31.1%) as well as better from everywhere on the floor. All of this has come while seeing a dip in minutes and usage -- the latter at the lowest levels of his career -- while serving as one of the team's most reliable players in terms of both effort and consistency.


Just wanted to thank the entire Boston Celtics organization and the city of Boston. Extremely honored to receive this award. Red and I would have gotten along really well! ☘️
A post shared by Marcus Smart (@youngamechanger) on Apr 2, 2019 at 9:11am PDT


As one of Boston's most consistent, team-oriented, engaged players, Smart has embodied the esprit de corp of the greatest Celtics teams, making him a natural candidate for the Auerbach Award, given to the player who most reflects that great Celtic ethos.

One might argue Al Horford deserves the award just as much in this most erratic of seasons for his own stabilizing presence with the team, and you would not be wrong, but as a previous Auerbach award winner, it was high time Smart got his due, too.