Time for the young Jays to fly - starting tonight vs. Golden State


With 18 games to go in the regular season, it is time to test the wings of the young Jays and turn them loose. They are both the present and the future of the Celtics, and the playoffs are within view. Time for them to fly. 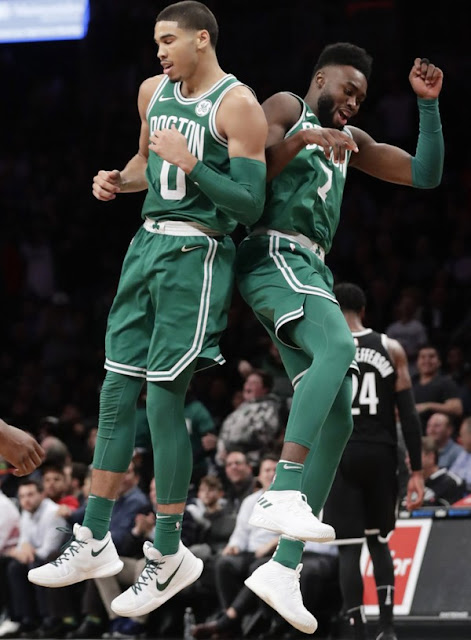 Jaylen Brown and Jayson Tatum showed what they could do in the 2017-18 post-season, and they certainly haven't settled into mediocrity over the past year. With no reflection on Marcus Morris' value to the team this season, he won't be here next year, and his shooting and production have fallen off lately. Jaylen and Jayson need more touches and more floor time in preparation for the playoffs. And tonight's contest versus Golden State would be a nice time to set them loose.

The Jay-Team compiled a total of 36.5 PPG and 9.2 RPG in last year's playoffs. The pair is averaging a combined 28.8 PPG thus far this season. They are averaging 10.7 RPG - primarily because of Tatum's improvement in that category. They averaged 68.3 MPG in the playoffs - and only 57.1 MPG this season. We came in to the season knowing their minutes would suffer, but so has the Celtics record. That was not expected.

Both Kyrie Irving and Marcus Smart can get these two youngsters the ball. And so can Terry Rozier. He did so in the post-season (5.7 APG). And add Al Horford to that list. Increase the Jay-Team's minutes and looks. Irving, Morris, Horford and Rozier are all in contract years. I never worry about Al, but I do have concerns about T-Ro and Morris playing for next year's contract. Jaylen and Jayson are still on their rookie contracts - cost the team little in dollars - and need to show how high they can fly. It should start tonight!