This season, with longtime Boston Celtics nemesis LeBron James headed west to join the even-longer-time Celtics nemesis Los Angeles Lakers, many of us expected new and interesting twists to both rivalries now that they have joined forces. 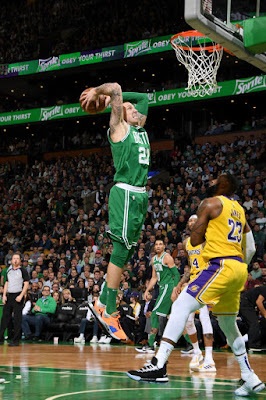 While most of us realized the tools weren't quite there yet in La-La Land, the presumption was that the franchise would see enough of a shorter-term boost from LeBron's presence, that at least the regular-season games would be intriguing, if not potential postseason meetings.

Ho-ly shit were we off the mark, and while it's been hard to enjoy any sort of schadenfreude on James' and the Jeanie Buss-run organization's part as they have floundered from one disaster to the next with Boston's own house in something of a disarray (though, let's be honest - nothing like what's taking place out west), the situation is still a boon to the Cs.

Beyond the arrival of LeBron's decline not only on the court, having shown himself to be human after all with an injury relegating him to the bench for 20 games over a crucial stretch for his team's playoff aspirations, and unwillingness or inability to drag this misfit bunch to the playoffs with his uncanny basketball abilities, we are on the precipice of a James-less postseason for the first time since 2005.

Without celebrating the injury that caused it, one can still take pleasure in the fact that the man who danced on the grave of the 2008 Celtics title core is now having much of the league do the same to him. I respect the man's greatness, mind you, but a little comeuppance is never a bad thing for all those the man crushed on the way.

The last time LeBron missed the playoffs a 26 year old Kobe lead the Lakers to a 34 win season in their first year without Shaq.
— Justin Rowan 🇨🇦 (@Cavsanada) March 8, 2019


There's more than catharsis here, though, as the Lakers looking disorganized and amateurish at just the moment they could have leveraged their market and history had not they gone with glitz and glamour again in an age of analytics and cap wizards may have inadvertently shifted perception of the team in ways it may take years or longer to repair.

This means the pool of desireable free agent destinations has shrunk just a little, with LeBron starting to look like more of an albatross than asset, if only because of the outsized demands of playing with the superstar, who, for the first time since missing the playoffs last may offer more bark than bite.

If the Lakers are looking to make a splash this summer, pretty sure both Julius Randle (20.7 pts + 8.8 rebounds per game) and D'Angelo Russell (20.5 pts + 6.8 assists) are free agents this summer. #LakeShow pic.twitter.com/vXrOJhpnkX
— Bryan Kalbrosky (@BryanKalbrosky) March 7, 2019


For Boston, there's no guarantee this won't shunt players to form new superteams elsewhere with less-fraught leaders and management, but with a cap landscape likely to be tighter than some assume due to the preponderance of one- and two-year contracts expiring at the same time is still probably at worst a net-neutral proposition.

That the Lakers won't be making the playoffs, however, is more than likely a good thing for the Cs, as they are unlikely to be able to get to better than a pick in the 6-12 range even if they rested LeBron for the rest of the season.

Minnesota's Jimmy Butler is most determined to find a way to the Los Angeles Clippers, league sources tell ESPN. The appeal of partnering with a second star - the Clippers have two max contract slots available in summer free agency - is an intriguing scenario for him.
— Adrian Wojnarowski (@wojespn) September 20, 2018

The L.A. Clippers since their first game together after the trade deadline (2/9 vs. Boston):


While they play six teams likely to advance in the postseason (Boston, the Golden State Warriors, Portland Trailblazers, Toronto Raptors, Oklahoma City Thunder and Milwaukee Bucks) and five likely playoff teams (the Utah Jazz [2x!], Los Angeles Clippers, Detroit Pistons and Brooklyn Nets), they also play six more games with likely lottery teams, five of whom are ahead of the Lakers in their own tank jobs, making "advancing" difficult.

At the same time, the Clippers, who probably should be doing the same given the protections on their picks, have been winning, including three in a row and seven of their last ten, capitalizing on the misfortune (or ineptitude) of their Staples Center neighbors, probably to burnish their credentials as a superior L.A. landing spot for free agents.

Boston may see an extra pick out of the bargain, as the owed selection is lottery-protected this season and next, after which it becomes second-rounders. Whether or not that gamble pays off, the Cs stand to gain, and in clinging to playoff hopes probably a week or three too long, the Lakers won't likely land in range of a pick likely to aid their efforts in attracting a certain player I am *not* going to write about today.