Marcus Smart's Flagrant 2 on Joel Embiid - What would Larry Bird have done?


As always, I looked at the replay many times. Joel Embiid's elbow into Marcus Smart on a screen was an obvious transgression, but Smart's reaction was too quick and too obvious. Last night's game against Philly was winnable - and certainly so if Marcus remained in the game. Joel's foul on Smart required retribution - but the right kind, with the right timing. 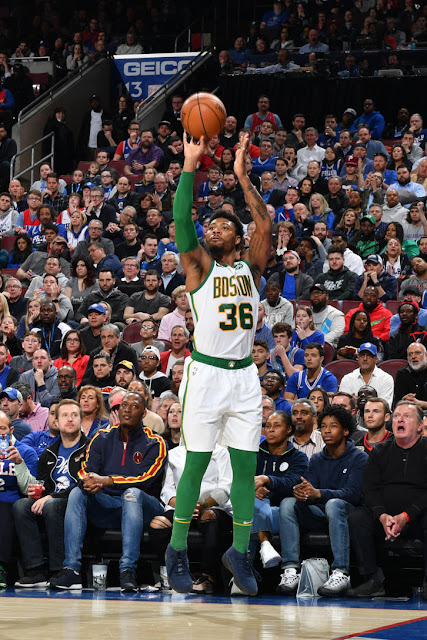 Tempers flare in these situations, particularly if you are Marcus Smart. But all eyes were on the Embiid/Smart pair, and there was nothing to be gained by Marcus' shove of Embiid - and everything to lose, including the game. Make no mistake about this. Larry Bird had a fiery temper. And he never backed down to any opponent. He was more than willing to match any push, shove (or elbow) with anybody - but in the flow of the game.

Larry getting pissed off and then punishing the opposing team on both offense and defense was common. Like Marcus, the Bird Man loved to play the game, and you can't do that from the locker room. Given the same circumstances, Bird may have simply counted to 10, got up from the floor - and planned his retribution. And remained in the game.

Coach Stevens explains how important Marcus Smart is to this Celtics team (Presented by https://t.co/Av8GdCAzPA) pic.twitter.com/ve2RE9JW6h

You just heard it from Brad Stevens. "I'm disappointed in Marcus." Being already short-handed, the Celtics needed Smart and his incendiary play on the court. There is nothing heroic about being tossed from a game. I, for one, am simply glad that once again Jayson Tatum corralled Smart before more serious contact occurred. Jayson always seems to be there quickly when Smart erupts.

I watched Bird closely his entire career, and you could almost read his mind when things got tense. He knew that he had to stay in the game for his team to win. And like the Incredible Hulk, it wasn't a good idea to make him angry. Those that read my stuff know very well that I am a dyed-in-the-wool fan of Marcus Smart. But I simply don't want him sitting in the locker room as his team takes it on the chin.