After losing to 76ers, Boston's playoff seeding is coming into focus


If nothing else, the Boston Celtics learned two things in their loss to the Philadelphia 76ers.

The first being that it takes damn near everything the 76ers have to beat Boston, and even then, required several key rotation players to miss large parts or even the entire game. The second is the fact that, barring a miracle, the Celtics will end up either the fourth or the fifth seed going into the playoffs.

With that certainty, the Celts can turn their attention to preparing for an almost-equally-certain first.round meeting with the Indiana Pacers, who they will play twice before the end of the regular season. 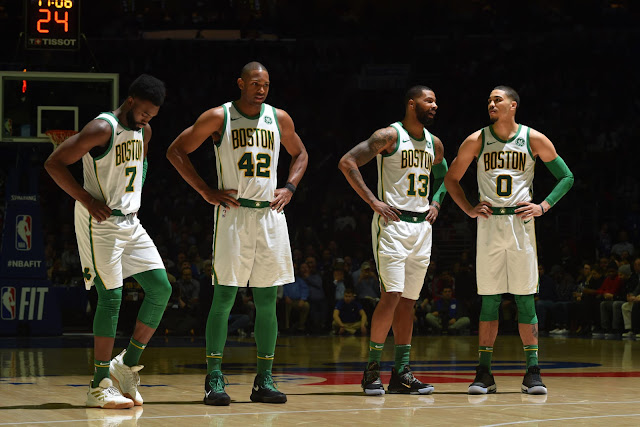 Game-planning for the Pacers without big man Aron Baynes for probably at least one of the two matchups will be especially helpful, as Indy's bigger, older-school front court will need some creativity to play well against, and the only really tough games left on the schedule apart from the San Antonio Spurs.

Should the Cs do poorly, they may remain in fifth place and miss home court for the first round, but Boston should be able to beat the Pacers even if Baynes is not ready to start the series by mid-April; from the sound of things, he may be back before that.


RT NBAonESPNRadio: "At the end of the day all roads are leading to the same destination so, it just depends on what road we take" celtics Jaylen Brown (FCHWPO) on seeding in the Eastern Conference with marckestecher #CUsRise

An additional bonus, if you can call this situation as much, is that the second-round meeting would be against the winner of the 1-8 seed match, most likely the Milwaukee Bucks, who are dealing with injuries (Malcolm Brogdon and Niko Mirotic may both be out into the first round of the postseason if not beyond) that could potentially linger into the second round, perhaps to Boston's advantage.

The Toronto Raptors are close behind in the standings, however, so who rests whom from each roster may end up being as important to the final standings as the remaining schedule at this point, and with the loss to Philly functionally removing most of Boston's control over the situation, at this point, we just have to hope the basketball gods toss us a favorable matchup or two.


A lot can change based on remaining head-to-head matchups but here’s Boston’s chances at each seeding, per ESPN’s Basketball Power Index:

As with many of you, I'm finding it difficult to get excited for the playoffs given this debacle of a season (even if it's been better of late), but a good finish to the regular season will help dispel some of my unease, and my eye will be most crucially on those Indiana games as we wrap up this season.