Editor's note: From time to time, we invite (or accept) contributions from readers who would like to make a contribution to CelticsLife, and this piece is by regular reader Michael Guetti. We hope you enjoy it. 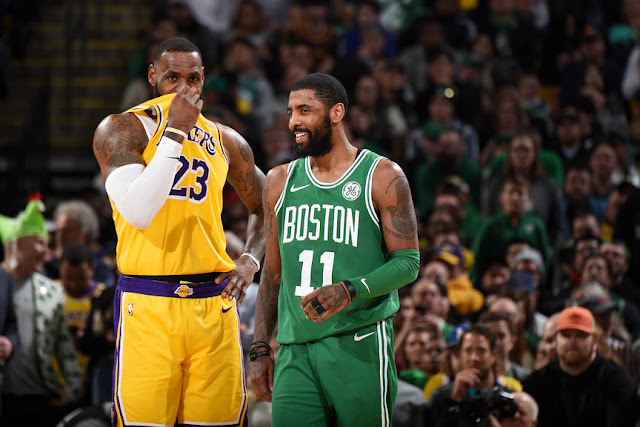 With 58 games down in the 2018-19 NBA season, the Boston Celtics have 24 chances to move into the upper echelons of the Eastern Conference. Not much time, and it’s not just about time. We have seen this group play brilliantly and we have seen other games where their play has been astonishingly inept: falling behind by double digits against inferior teams and even losing to inferior teams -- most recently, back-to-back home losses to the disorganized Los Angeles Clippers and the distracted Los Angeles Lakers?


Play great, win eight; play awful, well, you know that tune. There are plenty of teams in the NBA who can beat anybody on one night and lose to anybody on another. Is that our team? Is that the Celtics? And, is it just up-and-down team play that clouds our optimism for a strong finish? Or is it something deeper that we are reluctant to come to terms with? Are they the same old, same old, last-year-is-this-year’s team? When the shots fall, they win? When the shots fail, they lose?

Yes, the game is about making shots. And a miracle shot can turn a loss into a win. But relying on serendipitous fortune -- on hitting the lottery -- is placing all of your hope on a loser’s game.
Basketball, one ball, five players. Decisions to make all of the time. The easiest decision is to shoot but it can also be the worst decision. Remembering you have four teammates and you can pass, move, screen or ... trigger one from deep early in the shot clock or try another when the clock is nearly gone. The same shot?

Not on your life.


The game is not about only making shots but about:

Basketball is a game with five players and just a single ball. If you look at players on any team while a teammate has the ball, you will notice that many have their hands extended towards the player with the ball. They want a touch, a chance -- pass it to me, pass it to me!

When a shooter makes two or three shots in a row, would you take the next shot? Would you? Perhaps a layup, yes, but wouldn’t you look for that hot shooter, for the proverbial “heat-check?” Every team has a hierarchy, the Alpha Dog, the best shooter. Or the most powerful rebounder. Or the best passer. Or the guy who ends up on the floor all of the time, scrapping for the ball. All are necessary, all are needed.


As fans of the game, we notice when a player takes too many shots, particularly when a large percentage of those shots fail to find the bottom of the net. We also notice when a player is reluctant to pass. We all remember as kids, when one guy hogged the ball and seemed to shoot it every time he got his hands on it, right? I remember because ... I was one of those guys, who had eyes only for the rim.

But I started seeing the error of my ways and I changed, I did! Well, actually, the coach started taking me out when I fired up too many of what would have been long three-point shots before anybody else on the team had a chance to touch the ball -- and long before anyone had even thought about naming those long shots as three-pointers, of course. I would have loved if there had been a three-point line, sigh.

Ok, so here is the point of this long preamble -- here is our problem or, rather, here is the Celtics’ problem: Some players on the C’s take more shots than they should, make less meaningful passes than they should and, over the last two seasons, have not changed a lick. Not one bit. Can we say that today’s Celtics -- to steal (and misuse) part of an old quote by the late NFL coach Dennis Green -- that the Celtics “are what they were,” all the way back to the beginning of last season? Oh, I’m going to make a case for that ... that sameness ... which hangs over this team like a nightmare.

Since the Anthony Davis trade request ...


In the case of four players in particular, that cloud of sameness goes all the way back through their young basketball lives. (You should have taken ‘em out, Brad [Stevens], from Day One. Talked to them, sat them down, showed them in film sessions what they do to their teammates when they ignore them for long stretches of play -- what they do to the team!. No, you won’t do that? How will they learn?)

The culprits, or the players who may be just as oblivious as their coach, are three young guys -- Jaylen Brown, Jayson Tatum and Terry Rozier -- and one vet, Marcus Morris. Kyrie Irving is not part of this problem, even though he sometimes dribbles too much or shoots one he shouldn’t.

Kyrie is the most complete offensive player in the NBA, with astonishing shot-making ability and great passes. Any who believe the C’s are a better team when he is not on the floor should stop reading. But, before you go, ask yourself: Do the C’s defeat the Cavs in last season’s Eastern Conference Finals with a 100% healthy Irving able to play? I will always believe the answer is yes.


Imagine what it was like playing with an other worldly athlete like Tatum? Or another, like freakishly quick and agile Brown? Or someone who can shoot from the outside like Morris? Think you would have gotten much of a chance to touch the ball? To shoot it?

So, here is the nitty-gritty, with all stats “average per 36 minutes,” for those getting regular turns in the rotation:.


You can see that Morris, Brown and Tatum were unwilling passers, with the lowest assists on the team. And I’ll give you a hint. They have not changed this season, Morris is still last in assists, although his shooting was much improved until the last three or so weeks. Brown is still next to last in assists on the team -- he just doesn’t look to make any kind of meaningful pass once the ball gets into his hands.

Tatum’s assists have ticked up, to 2.2 per game this season, which is still not all that wonderful. And he continues to stop the ball for much of the time, as he tries get off some kind of shot. That is not good. He forces drives and turnaround jumpers, while he has increased his shots to 15.5 per game. Tatum taking more shots is not necessarily a bad thing, even though his shooting percentage has slipped a bit this season, to 45.3% but, after Kyrie, you would want Tatum to take a critical shot before anyone else.

What you would also want, with his increase in shots, is for him to give the ball up, move and use screens -- relying on his teammates to help him get open shots. But we don’t get that from Tatum, who never had a problem scoring on anybody from an early age. Brown is third in shot attempts behind Kyrie and Tatum, at 15.0 per game. Because Brown gets to the basket a lot, he is shooting 45% overall on two-point attempts.


His three-point shooting is not good, however, 31.6% from long range. And, though Rozier, a point guard, has decent assists for both last year and this, his shooting was bad last year and is worse this season. He takes 13.1 shots per game, making a dreary 38.4%. However, in the two games that Kyrie missed before the All-Star break, Rozier played like a coach would want his point guard to play. Has someone whispered in his ear?

He was more under control and passed up shots as he sought to find better shots for teammates. This was, and is, a good thing, if it continues. Finally, to further the point that these four players -- critical as they are to the Celtics’ hopes of advancing through the playoffs -- are essentially the same as they were last season, here’s a peek at the final three games of the East Finals against the Cleveland Cavaliers.

In Game Five, which the C’s won with a sterling defensive effort, Brown and Rozier stunk up the joint, with Brown making just 4-of-15 (2-of-8 threes) and reluctantly letting the ball go for just two assists. Rozier was worse shooting, 3-of-15 (1-of-7 threes), with six assists. Tatum, who took 15 shots just like Brown and Rozier, fared a good deal better, making 7-of-15 and scoring 24 points, with four assists.


As we remember, that would be the C’s last victory in that series, as they lost the final two games to be eliminated. In Game Six, Brown and Rozier shot the ball very well. Brown scored 27 points but again had just a single assist. Rozier made 6-of-10 three-point shots on the way to 28 points but Tatum was able to get just 13 shots, making seven.

Whether a coincidence in the two losses or not, Aron Baynes, as a starter, had played 29 minutes in the Game Five win -- with seven rebounds and six points. In the final two games, Baynes played 19 minutes in each, with four rebounds in Game Six and five in Game Seven. A point about the lack of passing by the ball-handlers is apparent in Baynes’ offensive chances. He was shut out, missing his only shot (a three-pointer) in Game Six and ... did not get a shot from the field in Game Seven, scoring three points from the line.

In that Game Seven, Brown and Rozier combined to miss 25-of-32 shots. Brown did his usual thing, passing ... errr, not passing -- the ball, with a single assist, while misfiring on 9-of-12 from long range. Rozier was even worse, missing 12-of-14 shots, including a donut from three, 0-of-10. In the entire playoffs -- remember, no Kyrie -- but Brown shot well, averaging the most shots on the team while shooting nearly 47%.


Morris took the next-most shots, making 36.8% but nearly 42% from long range. Rozier and Tatum were tied for third in shots, with Tatum making 47% of his twos, but a poor 32.4% in threes. Except for Games Five and Seven, Rozier and Brown had a solid series. But, as was pointed out at the top of this article -- “when” is often more important than “what.” And, given two seasons of unchanging statistics, when some players shoot poorly, are we dreaming when we expect them to turn to other aspects of the game, such as making the meaningful pass or knowing when not to shoot?

Have we seen Tatum or Brown start to the hoop and then make a clever pass to an open teammate? Or Morris, either, for that matter? Changes are needed, both in the game plan and in the manner of attack. “Same old, same old” is not going to bring a banner to Boston this year, unless those three young guys, and Morris, alter their play. But, as an old boss of mine used to say, with his tongue imbedded firmly in his cheek:


Michael Guetti is a regular reader and commenter on CelticsLife, and now, an occasional contributor as well. If you'd like to join the ranks of our guest writers, drop me a line at justin.quinnn@gmail dot com with your idea, and maybe you, too, can have a go at the soapbox.