Looking back at how the KG deal almost wasn't, some things to consider


In these trying times for Boston Celtics fans anxiously clinging to hope for a blockbuster deal in the works for years, I'd like to share a memory of mine about the last time we were in that position. 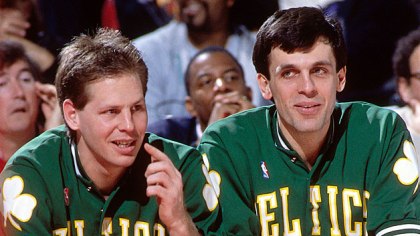 It was a little less than 12 years ago, and recently-minted Celtics General Manager Danny Ainge had just worked out a deal with former teammate and then-Minnesota Timberwolves GM Kevin McHale for a certain marquee player you have probably already divined.

Said a one Marc Stein (then of ESPN):

"The proposed trade that would have sent Kevin Garnett to Boston, agreed to in principle by ex-teammates Kevin McHale and Danny Ainge, was taken off the table Thursday after Garnett got word to the Celtics that he doesn't want to play for them."


Said Garnett's agent, Andy Miller, of the situation (via Chris Sheridan per Stein - normally I don't like giving the former press, but in this case, context makes it worth it):

"The Boston trade isn't happening ... If a trade were to happen, that's not a destination that we're interested in pursuing."


The full article is worth a read to see the parallels, which are striking. I'm not making any promises here, given how many ways it can still go wrong, but though you might enjoy this little nugget after the rollercoaster start to the week.