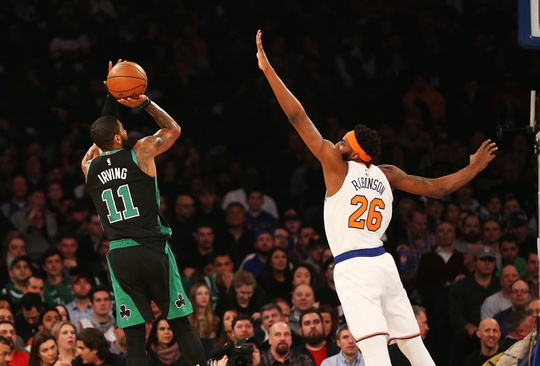 After a day full of rumors and innuendo the Boston Celtics ended on a high note with a win on the road over the New York Knicks, 113-99. The C's controlled the game essentially all night as they coasted to their 33rd victory of the season in a well-rounded effort. Six Celtics finished the game scoring in double-figures and the won the turnover battle in decisive fashion, 17-7.

Kyrie Irving dropped a game-high 23 points, 10 rebounds, 6 assists, and a pair of steals. Gordon Hayward had a solid game, scoring 14 points on 5 of 8 shooting and Al Horford had 14 points, 9 rebounds, and 4 assists.

For the Knicks, Damyean Dotson scored 22 points with 6 rebounds and rookie Kevin Knox chipped in 21 points despite shooting 2 of 7 from the outside.

Hayward showed he's still got the ups at the end of the 1st quarter:

Not to be outdone in the highlight department, Jaylen Brown showed some serious hops in several NBA Jam-esque throwdowns, including this one late in the game off of a lazy Knicks turnover:

The Celtics coasted through this one from start-to-finish, and have now won 8 of their last 9 games.