Marcus Smart's unlocked his 3, and that should make teams nervous


I knew this day would come, and you can check the receipts.

What I am referring to is the fact that of all the people in the NBA, Marcus Smart is consistently a league-average three-point shooter, and I called that ish earlier this season on the CelticsLife Podcast. 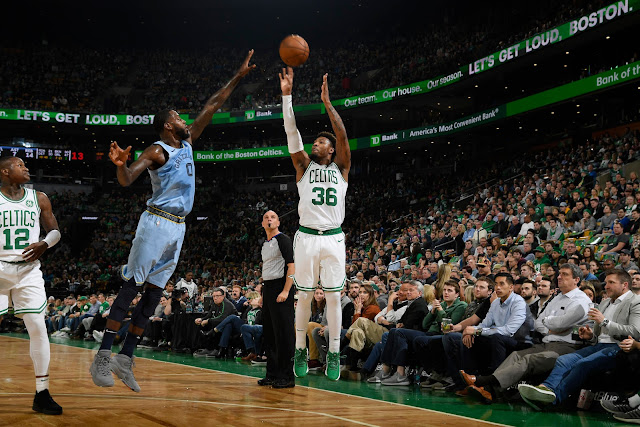 Of course, I also called it last year on the pod, so take my predictions with a grain of salt; like a lot of you, I've been waiting for the defensive wunderkind to find his spots on offense, and find them (finally!) he has.

Gone are the days when the CL Pod Drinking Game™ relied on Smart Shots (you take one when Marcus nails a trey) to keep things interesting on the rare game when one went in; the Oklahoma State product now connecting on a career high 1.5 per game on a career-low 6.3 attempts - and in some of his more recent games, like versus the Memphis Grizzlies, you'd better have the next day off with Marcus dropping six of his eight attempts into the cup.

Marcus Smart on his hot 3-point shooting: "I’ve always been the underdog and I’ve always bet on myself. This isn’t new to me and, to be honest, it’s not even a surprise. I’ve been putting in the work and it’s starting to pay off."
— Chris Forsberg (@ChrisForsberg_) January 19, 2019


It's not just drinking games Smart is making more interesting - it's increasing his gravity on the floor as teams struggle to adjust to his newfound marksmanship, opening up driving and cutting lanes for his teammates that, when combined for his near-legendary defensive prowess, is making his contract (viewed by some as a little on the high end) one of the best values in the league for as long as the offense keeps pace with the D.

Marcus is not just shooting above league average now, he's knocking them down at a very healthy rate of 37.4% - better than Klay Thompson, Devin Booker, Joe Ingles, Jamal Murray, Victor Oladipo, and plenty of other, established shooters in the league.


Can he keep it up? I won't venture a guess, as I am superstitious of that sort of thing, but I will say that if he can, it's going to spell trouble for the rest of the league, especially given Kyrie Irving's newfound interest in defense and, more importantly, distribution and effective leadership.

And if the bench falls in line? Game over.