The Boston Celtics cruised by the Brooklyn Nets 116-95 on Monday night to get their third straight win. The C's put together a very workman-like effort against a shorthanded Nets team, and came away with a relatively easy win on their home court. Boston used a season-high 37 assists and solid contributions across the board to secure the win. 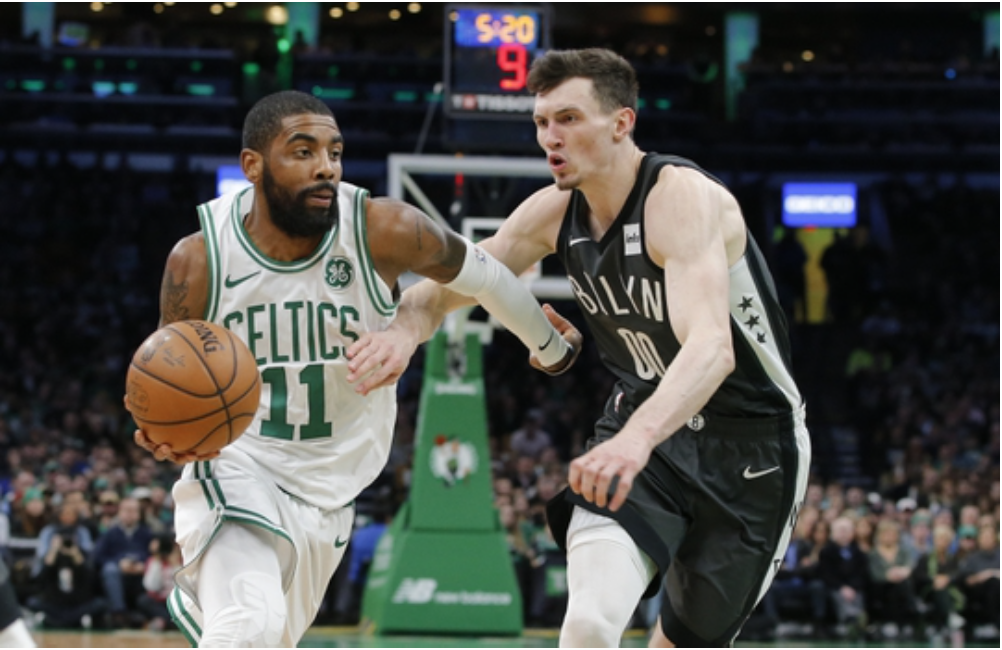 Kyrie Irving led the Celtics with 17 points and six assists in just 28 minutes. Jayson Tatum added 16 points, four rebounds, and four assists, and six other Boston players joined them in double figures. Rodions Kurcus (no, that isn't a typo) led the Nets with 24 points, and Kenneth Faried added 13 points and 12 rebounds off the bench.

The "Hospital Celtics" got some reinforcements back on Monday night in the form of Irving, Marcus Morris, and Robert Williams, a very welcome site after each had missed time with minor injuries. While the C's were almost back to whole, minus Aron Baynes (hand), Brooklyn came into the game missing six regular rotation players.

Although dealing with a depletes roster, the Nets came out firing, knocking down their first four three point shots and scoring 12 points in the first two minutes of the game. Kurucs went 3-3 from beyond the arc early on and really made Boston pay for not defending the drive-and-kick game well enough.

Might wanna guard that Kurucs dude from now on. He has three of the Nets' five (FIVE) 3-pointers over the first four minutes.

Not one to be outdone, Marcus Smart, new flashy haircut and all, put on a first quarter shooting display of his own. After missing his first three of the game, Smart canned three shots from deep, including back-to-back threes with just over five minutes left in the quarter. Smart helped to right the ship and turn things around for the C's early on. After getting behind 9-2 early, Boston went on a 21-8 run to retake the lead.

Say what you want about Marcus Smart's 3-point shooting, but he's up to 35 percent for the season. He shot 30 last season and 28 the year before. #Celtics #Nets

Boston shot the ball well in the first quarter, knocking down over 50 percent of their shots from all three areas on the floor. They also capitalized on the sloppiness of the Nets. The Celtics scored 13 points off of 11 Brooklyn turnovers in the first quarter alone. Brooklyn cooled off from the field, and ended up shooting just 38 percent in the quarter.

A 14-0 Boston run that spilled over from the first quarter to the second stretched the Boston lead out to 18 with just over a minute into the second frame. The Nets showed no ability to stop the Celtics on the offensive end, and little chance of being able to go shot-for-shot with them either. With three games in five days at the end of the week, it looked like Boston was doing everything they could to put this game away early and get some extra rest for their starters.

Kurucs was the lone bright spot of the first half for the Nets, with 17 points on 5-5 shooting from three point range. His long distance shooting and a few late buckets from Spencer Dinwiddie cut the Celtics' lead down to 11 heading into the halftime break. The Celtics cooled off considerably down the stretch in the second quarter, and went scoreless over the final 2:48 of the half.

Celtics scored just nine points in the final eight minutes of the second quarter but still lead by 11 at the break.

Brooklyn came out of the halftime break and continued to ship away at the Boston lead. What was once a 20-point lead early in the second quarter was down to five points after the Nets started the second half on a 9-3 run. Just as it looked like the Celtics may have taken their foot off the gas pedal long enough for Brooklyn to find a spark, eight straight points, all from Irving and Morris, extended the lead back out to double digits.

Ball movement, multiple paint touches, and making the extra effort plays have been the recipe for success for the Celtics over the early part of the season. When they don't do those things, things can get ugly, but when everyone is committed to playing the right way, it's a thing of beauty. After the Nets cut the lead down to five early in the third quarter, that's exactly what they did. The ball started flowing again, people were diving on the floor, and the Celtics stretched the lead back out to 14 points with six minutes to go.

Dinwiddie came alive in the third quarter with six points and Shabazz Napier stuffed the stat sheet to keep the Nets within striking distance, but Boston went into the fourth quarter with a 12-point lead.

Daniel Theis was a constant source of energy off the bench throughout the game. He worked hard on the boards, and kept a number of balls alive on the offensive glass. Theis finished well around the rim and made a number of disruptive plays on the defensive end. Brad Stevens shortened his rotation and played just four reserve players until he emptied his bench late in the fourth. Gordon Hayward, Terry Rozier, and Theis all scored in double figures to go along with all five starters. The depth of the Celtics was on full display, and while nobody really stood out, everybody who played contributed.

Boston extended their lead to 20 half way through the fourth quarter and put the game away. No starter played more than 28 minutes. The Celtics will play their next game on Wednesday night when they host the Indiana Pacers at 7:00pm.