We remember it vividly. It was Game Four of the 2010 NBA Finals - Celtics against the Lakers - and in the fourth quarter, Nate Robinson and Glen "Big Baby" Davis stepped up big time to lead Boston to victory, to tie the series. Nate hopped on Big Baby's back, and in the post-game press conference, Davis said he never felt Nate on his back. That's when Robinson compared the duo to Donkey and Shrek. 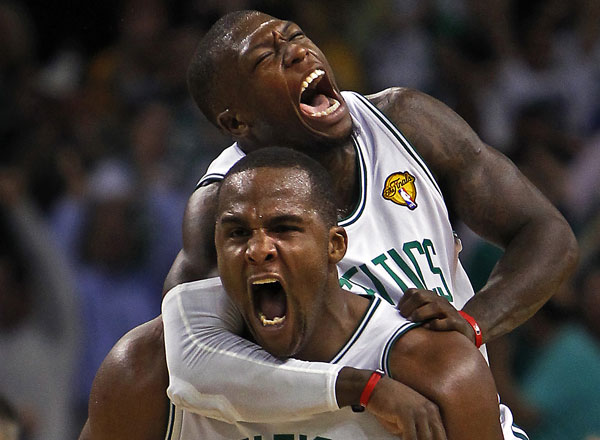 I was invited by Fox Sports and the BIG3 League to TD Garden this past summer as a member of the press corps, and I was able to observe the two former Celtics in action in the 3-on-3 contests. Big Baby looked a step slower but his familiar moves under the hoop still work. Nate is just plain exciting to watch. You can see them in BIG3 action - along with a few other familiar faces - in the video below.

Davis has fallen on hard times. He is still facing drug charges and allegations of felony assault. He was scheduled to play for Zadar of the Croation League, but even that has broken down (Per Wikipedia):

In September 2018 he was announced as a new player for Zadar of the Croatian League and the ABA League, but failed to make a final agreement with the club management consequently leaving Zadar before signing a contract.

Robinson was scheduled to play for Homenetmen of the Lebanese Basketball League, but a previous injury is preventing him for doing so at this time. Nate, at age 34, still has hopes of returning to the NBA. We wish Donkey and Shrek all the best in basketball and in life.