The Celtics we envisioned have arrived 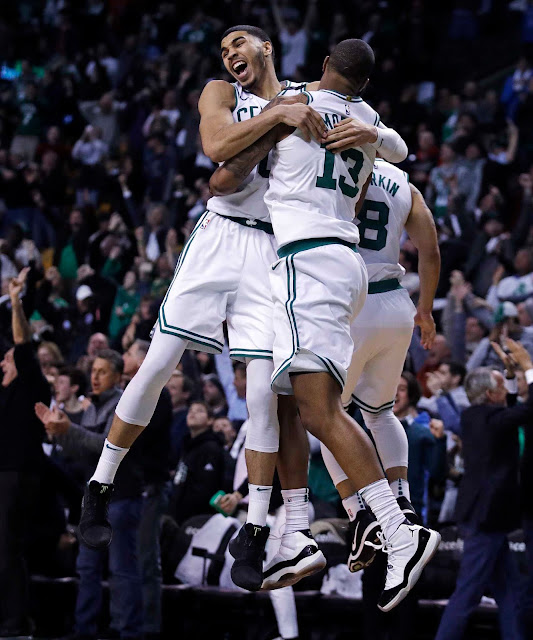 "It's a make and miss league." How many times have we all heard that NBA cliche? Well, you're going to hear it again -- because it's true. Want evidence? Look no further than the past couple weeks for the Boston Celtics.

The Celtics are flat out getting buckets right now.

Well, I'll let the Daryl Morey/Billy Bean analytic junkies of the world flood x- and y- axes, plotting and pointing red dots on sheets of graph paper to discover exactly why the Celtics are finally making shots. Instead, I used a more archaic methodology to sum up the Celtics recent success. It's called "oculi testari" -- "the eye test" for you laymen. After dissecting 1,104 minutes of game time this year, especially paying attention to their recent success in relation to the debacle that was the first part of this season, I have simplified the Celtics stellar play as of late down to one word: joy.

If you've paid as much attention to the team's body language as I have, it's pretty evident. They were not having fun this season. The Celtics shoulders shrugged after every miss. Their heads dropped with every loss. Their mojo was sucked out of them. But now, they're laughing again. They're jovial again. And it all started with continuing to play the right way.

That's what the problem was all season. The Celtics (for the most part) moved the ball around, finding teammates at every turn. Only, dudes weren't knocking down shots.

That started an unfortunate domino effect.

Teammates not making shots = a reluctancy to move the ball around.

All of these dominoes unfortunately tumbled onto the defensive side as well, the part of the Celtics DNA that historically hasn't been questioned (not as much as their offense, anyway).

Then, it clicked. Large in part to Marcus Smart (our only 100% reliable defender) and Marcus Morris, whom Brad Stevens agreed has been our most consistent player.

With two of our bench mob now in the starting lineup, the Celtics got nasty. They got feisty on the defensive end. The result: defense turned into offense, and vice versa.

Guess what else happened? The Law of Averages started to finally average out.

With a fortuitous schedule upon us, the Celtics can continue to rack up the wins, making up for their lackluster effort and start to this season. They just have to fight for 48-minutes. They just have to trust one another. And they just gotta have some fun doing it.