Over last four games, Marcus Smart has been shooting like Klay Thompson


Of course it's only four games, but the numbers are surprising. For the season, Marcus Smart is hitting 39.8% of his field goals, and Klay Thompson is shooting them at a 45.6% clip. On 3-pointers, they are close - with Marcus at 33.3% and Klay at 35.9%. Things change if we look at only the past four games. 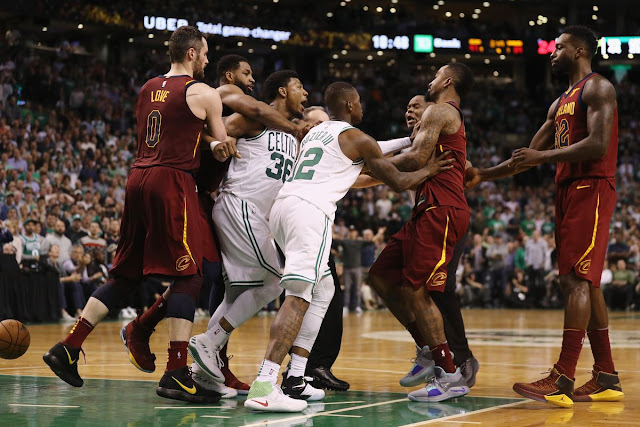 The Celtics have contested 89% of opponent's 3's during their current win streak.
Probably just a coincidence that Marcus "Cyborg Ninja" Smart has started everyone of these games ...https://t.co/tMkOxM5XuF pic.twitter.com/I4ElYFXxxn

It also seems Marcus' injection into the starting lineup has added to Boston's defense of the 3-point arc (Per NBCSports' Max Lederman):

So what’s different between the team of the last three games and the .500 squad from the first 20? Their scorching hot offense is certainly a factor, but another statistical indicator that deserves monitoring is the percentage of opponents' three-point field goals the Celtics are contesting. During the first 20 games of the season, the C’s contested 80% of opponents' threes, but in the last three games that number has jumped to 89%. For context, the Denver Nuggets lead the NBA with an 86% three-point contest rate.

One of the main reasons for the higher contest rate is the additional minutes Marcus Smart has received since entering the starting lineup. The Celtics' cyborg ninja is averaging 7.0 contested threes per game as a starter (Draymond Green leads the NBA with an average of 5.6), helping prove he is, in fact, a defensive alpha.

The Celtics face the Knicks tonight, and Jaylen Brown is expected to play, either back in the starting-5 or from the bench. It would be foolhardy of Brad Stevens to return immediately to his original starting unit with the recent success with the two Marci (Smart and Marcus Morris) starting the game. We need to keep that winning streak going.