James Harden drops 45 and the Houston Rockets roll over the Celtics, 127-113. 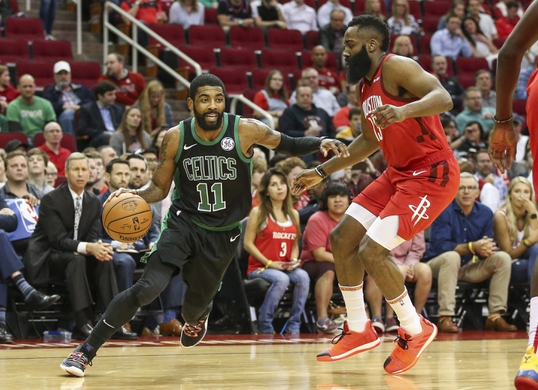 James Harden had a big night and the Houston Rockets beat the Boston Celtics at the Toyota Center, 127-113. A game that was very entertaining through three quarters turned sour for the Celtics in the 4th quarter as the Rockets ran away with the victory on their home floor.

Kyrie Irving had a solid game, scoring 23 points and dishing 11 assists while shooting 53.8% from the floor, including his usual stock of highlight-reel offense. Marcus Morris scored 19 points to go with 6 rebounds before being ejected late in the 4th with his 2nd technical foul, while Jaylen Brown chipped in 18 points off the bench in the losing effort.

Harden shot a meager 42.6% from the field, but he was hitting from the outside (9 of 18) and mananged to get himself to the line for 17 free throws. Eric Gordon chipped in 20 points and Clint Capela had a monster effort of 24 points and 18 rebounds as the Celtics once again found themselves overwhelmed on the glass sans Aron Baynes and Robert Williams.

The Rockets came out swinging, opening up a 17-point lead early in the game behind an onslaught of step-back jumpers from Harden. He was unconscious to start the game, getting his shot off anytime he wanted:

Not to be outdone, Irving helped the Celtics storm back from their early deficit and had his squad within two points at the half. He filled up the scoring column for the C's and helped spark a 22-7 run to close the 2nd quarter and keep things close in Houston (57-55 at halftime):

The Rockets came out of the break hot but the Celtics were able to retake the lead, albeit briefly, in a 3rd quarter that was a back-and-forth battle that would have been so much better if it took place at the end of the game. Instead, the 3rd quarter got closed out with an Austin Rivers heave that fell in Houston's favor to give them a 6-point lead at the end of three, 92-86. From there things continued downhill for the Celtics.

Houston rattled off a 11-4 run to start the 4th and the C's were never quite able to get things back within reach. And just to pile on, Marcus Morris got a 2nd technical foul and bounced from the game with just under 5 minutes remaining. A game filled with terrific highlights from the C's ended in rather unexciting fashion and ultimately added another L to their record.