There is little reason to go into the specifics of the confrontation between the Warriors Kevin Durant and Draymond Green. The important point is that the team suspended Green for one game without pay, apparently siding with Durant. Could this be the beginning of a decline for this powerhouse. It definitely could - and have significant implications for the League's landscape in the near future. The photo below was from friendlier times. 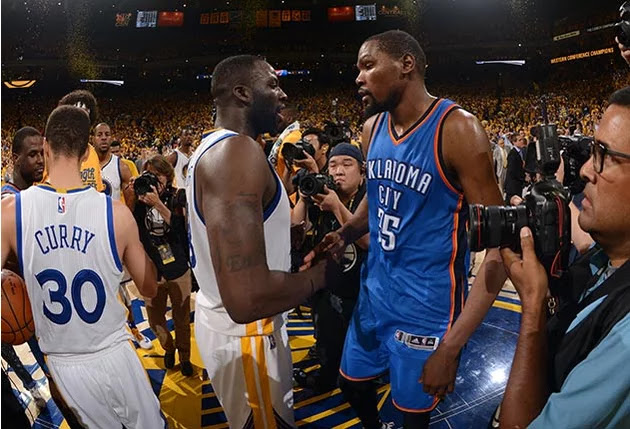 Reporting with @MarcJSpearsESPN on what's described as one of the most intense and volatile scenes of this Golden State championship era. Organization is working through aftermath of Kevin Durant/Draymond Green exchange on Monday night. https://t.co/m6FSFKNiKJ

The problem started with a turnover by Draymond, but beneath that lies a seniority/superiority issue. There is also the fact that Kevin has a player option for next season and there is little indication where he plans to be.

A turnover. blowup. A suspension.

What if this is how the Warriors dynasty goes down? This is has become serious enough to be concerned about thathttps://t.co/OMFo8RugZA pic.twitter.com/XWoRDxUy12

David Aldridge is right. We have seen this before. Jerry West brought Kobe Bryant and Shaquille O'Neal to the Lakers, and it worked very well for a while - before the bickering. Ironically, West also lured Durant away from Danny Ainge's Celtics, talking him into partnering with Green, Steph Curry and Klay Thompson. Now we have bickering once again.

Jerry West's Clippers have cap room this summer for two stars. Durant went to Golden State, in part, because of its existing talent. The Clippers don't have that - yet. The Celtics do have that high-level talent, but no cap space. That can always change. Al Horford, Kyrie irving and Aron Baynes all have player options for next season.

Danny always goes after the Big Fish, and even at 30 years old, Durant is one. Right now the Celtics are hopefully going to turn their very-mediocre season around, stay with their present core, and go for it. If things change, a Danny Ainge-Jerry West tug-of-war would make for an interesting summer. We are due for some excitement.