For the Gordon Hayward naysayers, I have some news!


The Celtics needed last night's win against the Hawks, and one of the several bright spots was the two-way play of Gordon Hayward. Hayward has heard of the many derogatory comments and tweets about his supposedly-poor defense and spotty shooting accuracy, but he stoically keeps his mind on continued improvement - and that improvement was on display last night. 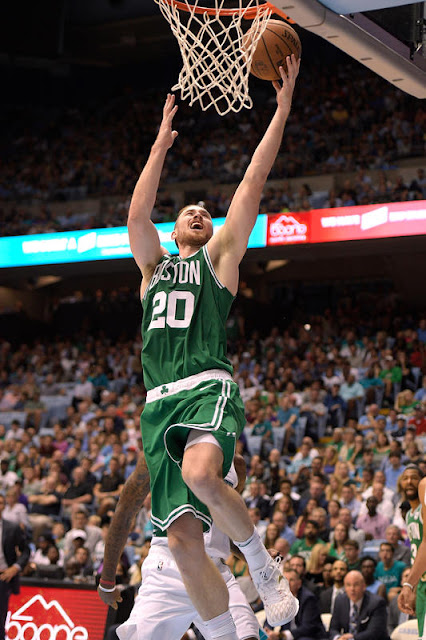 The Celtics took the flight out of the Hawks with a 114-96 rout of Atlanta, so Gordon only saw 22 minutes of floor time. But he scored 11 points, took down five boards and passed off for four assists. He also blocked two shots, had only one turnover - and his team-high plus/minus was ironically his shirt number of (plus) 20.

His per-36-minute numbers from last night project to 18 points, eight rebounds, seven assists and three blocks. He shot 57% from the field, 33% on treys and 100% from the foul line. His efficient scoring produced a True Shooting Percentage of 69.8%. The League-high average for that stat is 72.% by Domantas Sabonis.

Gordon Hayward’s defense has been really good for several games in a row.

His Offensive Rating for the game was 112.8 - his Defensive Rating was 68.8 - and his Net Rating was a terrific 44.0. So at least for this game, he shot the ball well and defended well. Carefully watch his transition-defense footwork in the sequence below.

This is spectacular transition defense from Gordon Hayward pic.twitter.com/Lcb8NUNFdd

Hayward coming off the bench is an experiment, but I doubt we will see that long-term. He is Boston's most versatile player, and he will have a secure fit in the starting-5. The nays will turn to yays in the near future.