Could the key to Boston's season be as simple as playing...less?


There is a tired old stand-up joke that goes, "A man went to the doctor, and said 'Doc, my back hurts when I do this!'; the doctor said, 'Don't do that, then'". 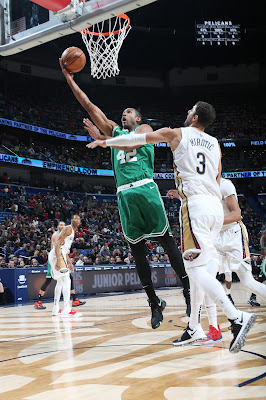 Oddly enough, this 'strategy', if you can call it that, might just be the solution for the Boston Celtics' in-game woes.

Struggling to get everyone enough shots and burn to develop a chemistry able to win, the solution might just be as simple as giving guys the night off on a rotating schedule, with injuries and stress dictating the order.

While not playing some of your best players as a way to get better sounds counterintuitive, given the fact that Boston has so many high-usage players struggling to mesh coherently, why not use the regular season to experiment more with lineup changes while letting older and rehabbing guys take time off to stay fresh for the postseason?

In fact, this may already be happening, with Al Horford taking tonight off along with Jaylen Brown, who is rehabbing a bruised posterior.

This may have been happening as far back as last season for key players like Al, though the number of injuries made much of such an approach mostly involuntary.

We've seen results from the Marci (Marcus Smart and Morris) being injected into the starting lineup, while Jaylen and Gordon Hayward are on the mend (and looking to re-establish their game), they should remain on the bench. This is not and should not be taken as an aspersion; neither have been fully right this season, and the fit makes more sense from both a strategic and developmental perspective.


For those of you thinking “rest after three days off?”, Celtics did this exact thing with Horford in late November last year and he went on an absolute tear afterwards. https://t.co/yepcAYla5f
— Sean Grande (@SeanGrandePBP) November 29, 2018

Self-care is crucial to team success; an empty glass cannot pour anything forth, so rest should be a priority, and when it can also help to chisel out roles on the team better suited to winning than ego gratification or paycheck hunting, it becomes even more attractive. While I recognize the pressure has not made the situation any easier, winning solves a lot of the individual concerns players on this team may have, and oddly enough, the best way to play better may just be...