The Boston Celtics snapped their four game winning streak after a 102-101 loss to the Indiana Pacers. Victor Oladipo knocked down a game-winning three with just a few seconds left to seal the win. The playoff-like atmosphere was indicative of how competitive this game was, and a potential foreshadowing of a matchup in April/May between two of the top teams in the Eastern Conference. 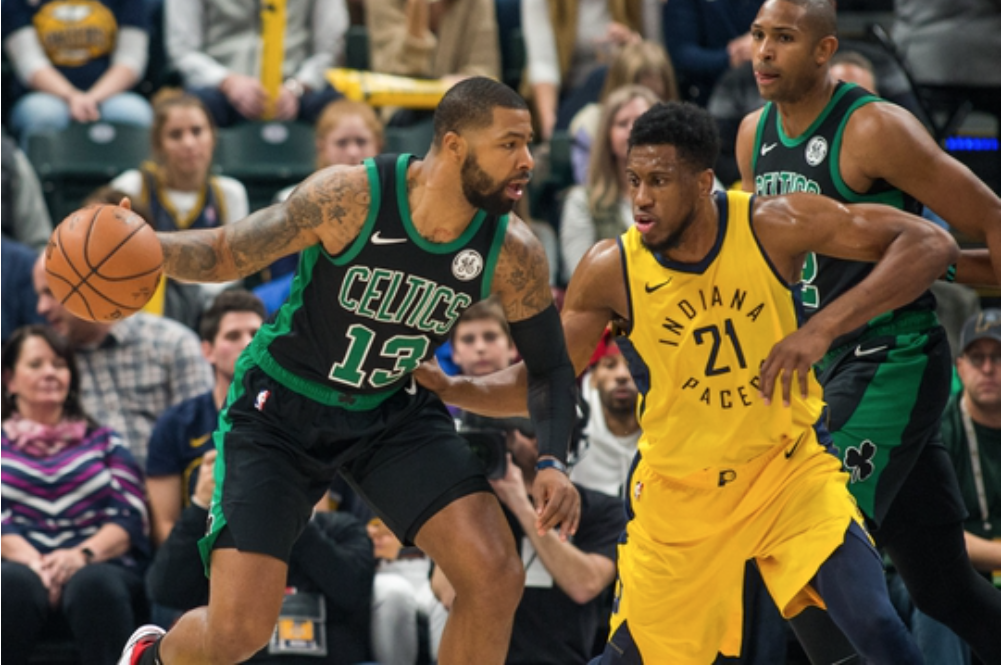 Marcus Morris led the Celtics with 23 points off the bench, continuing his early season campaign for the Sixth Man of the Year award. Kyrie Irving added 18, including nine in the fourth quarter, and Al Horford chipped in 14. Oladipo had a game-high 24 points and 12 rebounds, while Tyreke Evans contributed 17 points off the bench. Domantas Sabonis stuffed the stat sheet with 12 points, nine rebounds, and five assists

The hot shooting from outside against Milwaukee certainly didn't care over into the first quarter in Indiana. The Celtics started the game going 1-12 from the field and 0-8 from the three-point line. While the shots weren't falling, the looks were open and were a result of good ball-movement and a strong drive-and-kick game. The C's withstood the cold start from the field and used a 12-0 run after getting down 7-0 to take the lead halfway through the first quarter.

Morris continued his offensive groove and helped fuel a 28-11 run to end the quarter with eight points off the bench. While the offense was finding it's rhythm, the defense was as stout as ever. Indiana shot just 30 percent from the floor, and Oladipo couldn't get anything going after being guarded by the likes of Jaylen Brown and Marcus Smart.

Gordon Hayward, born in Indiana and star at Butler University, made quite an impact in the opening minutes of the second quarter. On consecutive possessions, Hayward threw down a fast break alley-oop from Terry Rozier, and then blocked shots from TJ Leaf and Sabonis. Hayward continues to show his versatility on both ends of the floor the more comfortable/healthy he gets.

Much like the Celtics found their offense in the first quarter, the Pacers found theirs throughout the second. Indiana knocked down some threes and that opened up driving lanes. The movement of the ball left Boston scrambling on defense, which lead to a number of fouls. The Pacers went 10-16 from the charity stripe in the first half, 10 of which came in the second quarter, while the C's attempted just five free throws . Irving played just 11 minutes in the opening half after picking up his third foul late in the second quarter. The offense wasn't exactly clicking with him on the floor, but his extended absence made it stall even more. A lowly 17-point quarter lead to a 45-45 tie heading into the halftime break.

Al Horford was the offense for the Celtics to open up the second half. Horford scored seven of the 10 points the team scored in the first five minutes of action. An above-the-break three, a layup off of an offensive rebound, and a loud dunk after driving past a slow close-out really got Horford going after scoring just two points in the first half.

Unfortunately for the Celtics, the rest of the squad couldn't get anything going on offense. The Pacers were putting up points in a hurry and Boston fell behind by a few possessions. The lead never got out of hand, but Indiana was able to keep the advantage between three and six points for a majority of the quarter. Seven points in the last two minutes from Morris gave Boston a three point lead, but a buzzer-beating three pointer from Evans tied the game 72-72 heading to the final frame.

As expected, the beginning of the fourth quarter was highlighted by an Aron Baynes/Sabonis rock fight. Baynes hit two corner threes and Sabonis took it to Baynes in the post/pick-and-pop game. The two teams traded buckets throughout the middle of the fourth, and were tied 87-87 with six minutes to go.

The back-and-forth nature of the game increased in intensity as time dwindled down. Late threes from Oladipo and Brown kept the game as close as possible. From the six minute mark until the final minute of play, neither team had a lead bigger than two points. After a replay review gave Boston back the ball with 1:08 to play, Kyrie canned back-to-back threes from the right wing to take a 101-97 lead. Just as it looked like Boston had struck the killing blow, Oladipo knocked down two free throws and nailed a deep, contested three with 3.4 seconds left to win the game. The game came down to a fourth quarter duel between Kyrie and Oladipo, and the hometown hero came out on top.

The Celtics will play their next game in Denver on Monday night.