This was an odd one - but, hey, we are talking about the Phoenix Suns! With little more than a week before their season starts, the Phoenix Suns have fired General Manager, Ryan McDonough. 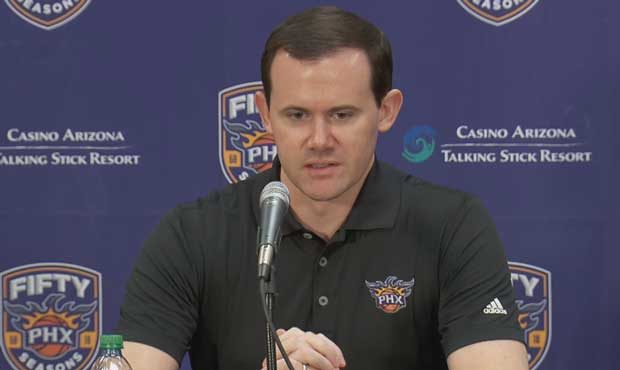 Clear already this goes beyond McDonough. At least 3 members of PHX front office and scouting staff have also been let go, perhaps more we don't know of yet/more to come, sources say. https://t.co/4d38f31750

McDonough has held the position of Sun's GM since May of 2013. Prior to that, he had worked for the Celtics under Danny Ainge as Director of International Scouting. The firing of Ryan is not surprising - only the timing (per ESPN's Marc J. Spears):

McDonough was hired by the Suns on May 7, 2013, in hopes that he could rebuild the franchise after the departure of Hall of Famer Steve Nash.

He drafted the likes of Devin Booker, Josh Jackson, TJ Warren, Alex Len, Dragan Bender and Deandre Ayton. He had some early success, but the Suns are still in the same rebuilding mode that they were in when McDonough was hired. The team went 155-255 during his tenure.

My question for Suns Robert Sarver is why now? You can certainly critique the resume of Ryan McDonough but why not let him go before the draft/free agency and not 1 week before the season starts.

Apparently weirdness is a long-time trait for the Phoenix organization. Their fans and sports writers have come to expect it. The following via ArizonaSports.com's Dan Bickley):

The Suns have image problems, ownership problems, petulance problems and talent problems. They do weird stuff.

The timing is preposterous and shockingly familiar. It feels like owner Robert Sarver doing Robert Sarver things. But it’s no worse than handing Devin Booker a max contract, drafting Deandre Ayton and leaving the Suns without a point guard on the doorstep of a new season.

The latest malfeasance is squarely on McDonough, a general manager ultimately burned for possessing too many point guards and not enough point guards.

I am looking forward to the day McHale trades DeAndre Ayton to the Celtics for Walt Lemon Jr. and a top-55 protected second-round pick. https://t.co/LKXsrAkztm

There will be more information on McDonough's firing in the near future. How about former Celtic star Kevin McHale as the new Suns GM? If that happens, could we see another huge McHale-Ainge swap along the lines of the Kevin Garnett heist? Stay tuned!