"The Truth" says the Celtics/Lakers rivalry is back

I'm sure I speak on behalf of the vast majority of Celtics faithful when I say how enjoyable it's been to watch the Los Angeles Lakers sleep and root in their own demise for the past five years.

Watching them switch seats with the LA Clippers as a laughing stock, paying ungodly amounts of money to dudes who'd never contribute, to watching them pass on the likes of Jaylen Brown and Jayson Tatum in a draft we had no business being in was nothing short of glorious.

But, fortunately (for Laker Nation) and unfortunately (for those happy to have seen LA in the basement), Jeanie Buss wisely canned her brother and Mitch Kupchak, thus extinguishing the inferno that was the Lakers garbage fire.

The ashes have now been sifted through and none other than one of the leaders of the Celtics/Lakers rivalry, Magic Johnson, is helping run the show. As a result, the Lakers are back to relevance. And with that, so too are the talks of a potential renewal of the historic rivalry, especially since Lebron James donned his ink on the Lakers contract a couple months back.

A quick look back:

First, there was Bill Russell vs. Wilt Chamberlain. 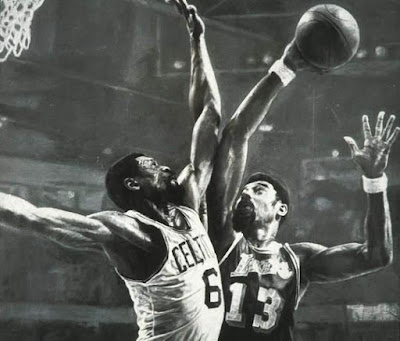 Then, it was the two men who arguably saved the league around four decades ago:
Larry Bird vs. Magic Johnson. 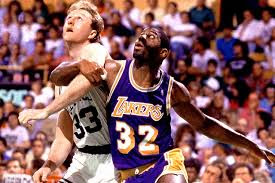 Most recently, it was Paul Pierce vs. Kobe Bryant.

Now, with two former teammates now on the opposite ends of the two most storied franchises in NBA history, could we be embarking on an epic collision course of Kyrie Irving vs. Lebron James? The Rivalry, Part IV could be upon us. And while I've been a huge fan of Paul Pierce, dating back to his days as a Jayhawk and, obviously, throughout his entire Celtics career, I'm going to have to hit the "let's-wait-and-see" button in regards to this potential rivalry.

After all, we haven't seen this newly-led Los Angeles Lebrons (err, I mean Lakers) team even play a game. Most prognosticators have them winning between 42-50 games. And while I feel a playoff berth (after a long drought) is inevitable, I, like most, feel the West is simply going to be a bloodbath, with the Lakers taking their eventual seats at home watching the Western Conference Finals -- and the NBA Finals -- from the comforts of their cushy mansions, as opposed to from the sidelines.

The Celtics, on the other hand, managed to win 55-games without Gordon Hayward who missed the entire season, without Kyrie for 22 games, Al Horford for 10 games, Marcus Smart for nearly 30, and so on. With Jaylen Brown now in his third year, Tatum looking to continue from a monster rookie year (especially in the post-season), a finally-fully-healthy Kyrie and Gordon, and of course Mr. Good Will Hunting himself, Brad Stevens, at the helm, the Celtics are poised to win around 60 games and take their rightful seat as the captains of the East.

So, where does that leave this rivalry? On hold, for the moment anyway.

As it stands, I see the Lakers and Celtics having two really good battles this season, but until Lebron gets some help and unless the kids can prove they can play under pressure, the potential collision course will be all for naught.

Will Kawhi Leonard leave for LA next summer? Will Jimmy Butler help the James train? Will Magic send the kids to the land of Mardi Gras in exchange for Anthony Davis? If so, then a Lakers birth to the Finals -- and an eventual matchup versus the Celtics -- would be highly likely. Thus opening the floodgates to a downpour of fuel onto a small rivalry flame that's been dormant for a decade. Until then, however, I have to say: listen to Truth, especially when he says we should "expect a good show this year," but let's hold off on putting Part IV of this rivalry in the refrigerator just yet.