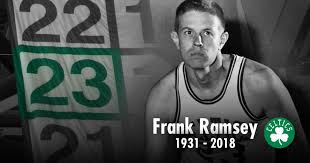 The number “23” has hung from the rafters of the Boston Garden since Oct. 16, 1965 in honor of the Celtics’ original sixth-man Frank Ramsey, who passed away a month ago today at the age of 86. 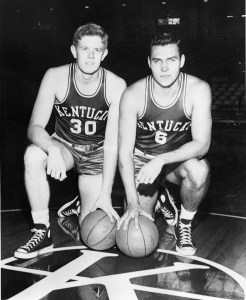 The ambitious and entrepreneurial Kentucky Gentleman won an NCAA championship for the legendary Adolph Rupp, then seven pro titles in a nine-year Celtic career. Never the most-touted player on any of his squads – teammate Cliff Hagan was a consensus 1st-team All-American, Ramsey 2nd- or 3rd-team during their Wildcat days – ol’ Frank was plenty good enough at enough things to earn induction to the Naismith Hall of Fame with the class of 1982.

While Frank Ramsey saw his share of victory, his early career did encounter a couple of roadblocks – courtesy of the Southeastern Conference and Uncle Sam – and at one point that career nearly took a complete detour, about 1,400 miles due west of Beantown.

The resilient Rupp would survive and go on to coach another couple of decades, but juniors Ramsey, Hagan and Lynn, MA native Lou Tsioropoulos were never afforded the opportunity to defend their 1952 title – punishment for a gambling/point-shaving scheme in which none of the three were implicated. The Wildcat program was shut down completely for the 1952-53 season and banned from championship play the following year.

Each of the three UK stars chose to remain enrolled in school and to utilize his final season of eligibility while pursuing graduate studies during the ’53-54 academic year. Rupp’s Raiders railroaded the rabble to an undefeated season and No. 1 ranking. 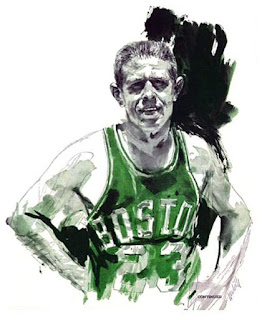 Now, the NBA of the early ‘50’s was hardly the sophisticated corporate entity we know today, replete with salary scales, luxury taxes and lawyers enough to dot all “i’s” and cross all “t’s” twice over (from both labor and management’s perspectives, of course) … back then they were still sorta “makin’ it up as they went,” fighting for survival and not always succeeding.

The “Powers” of early pro hoop knew well the value of the college game to their product – hell, the territorial component of the league’s Draft was designed to maximize gate revenue by placing proven stars in front of a receptive audience.

Collaborative survivalism notwithstanding, guys like Red Auerbach were always seeking competitive advantage. In early 1953, the wily C’s mentor devised a scheme whereby he could gain the pro rights to a sidelined Kentucky thoroughbred or three before the rest of the league “caught wise.”

Not only did Auerbach draft Ramsey (Rd. 1), Hagan (Rd. 3) AND Tsioropoulos (Rd. 7) in 1953 … the league didn’t “catch wise” for another 25 years until Boston gained the rights to Larry Bird by the same device. Red’s “device” was a simple clarification of when a player became eligible for selection in the NBA draft – fours years following the graduation of his high school class, even if the player has remaining eligibility. (Post-Bird, entry to the draft required a player to renounce any remaining collegiate eligibility.) 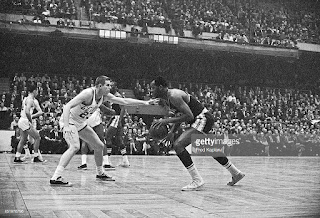 So Red owned the NBA rights to Ramsey et al during their last Rupp rodeo, and Frank joined the Celtics that fall while Hagan and Tsioropoulos were conscripted into military service. Ramsey was added to the “duty roster” a year later, and all three missed the 1955-56 season.

It was a re-vamped and not-yet-complete contingent of Boston Celtics from the unit which had been repulsed by the Syracuse Nationals – for the third consecutive post-season – that assembled for the 1956-57 season. Cast off were young vets Ernie Barrett and Red Morrison, along with the traded-away “Easy Ed” Macauley. The newbies in camp were the local kid Tsioropoulos, ROY-to-be Tom Heinsohn and five-time All-Star guard Andy Phillip who’d been waived over the summer by the Pistons. In the offing were still-Lt. Ramsey and the Olympian Russell.

[Numbers Note: While I haven’t found any confirmation, it appears that the NBA roster size was upped from 10 to 12 for the 1956-57 season.] 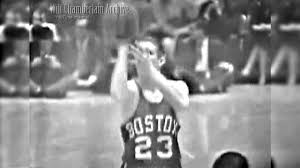 An early 10-game winning streak vaulted Boston to the top of the league at 16 – 8 by the time Red got Russ under contract (the official signing at a charity event) and into uniform on Dec. 22. Ramsey kicked off his “on loan from the Army” involvement 13 days later, participating in 29 consecutive encounters before being “unavailable” for six of the last dozen regular-season games.

Throughout his amateur career and rookie season, Frank Ramsey had been a two-handed shooter – a damn good one, one of the college game’s most prolific all-time scorers back then. But at the behest of C’s captain Bob Cousy, he’d rejoined the squad nearly two years later a one-handed shooter – still a damn good one, hitting nearly half (38 – 82) his playoff shots from the floor, Boston’s best post season marksman.

Frank was a clutch shooter as well, keeping the C’s alive in the first OT of that season’s iconic Game 7, and then delivering the franchise’s initial championship-clinching shot. For his part, Big Bill simply eclipsed George Mikan’s four-year old standard for post-season rebounds – didn’t even need the 32 he snatched in Game 7 to claim that record.

Speaking of Mr. Mikan, let’s get back to that “Almost Detour” I’d slipped into the discussion earlier. Here’s the simple scenario: (1) both Ramsey and Russell almost suited up in Laker gear for the ’56-57 season; (2) the success of the Mikan-era would have been re-ignited; and (3) the Laker franchise would never have left the Twin Cities.

Here’s the scheme in the words of the man who conjured it up, long-time Minnesota newspaperman Sid Hartman (excerpted from his reflections upon Laker Hall of Famer Vern Mikkelsen’s passing back in 2013):


Mikkelsen played 10 seasons in the league and was the subject of a trade that I, as general manager of the Lakers at the time, had proposed in 1956. Had the deal gone through, the Lakers would have probably never moved to Los Angeles. I made a trade with the Red Auerbach-coached Celtics with Mikkelsen going to the Celtics for three former Kentucky stars -- Cliff Hagan, Lou Tsioropoulos and Frank Ramsey – who were in the Army. By making that trade, we would have been assured of finishing last and being able to draft Bill Russell, who in several of his books verified the fact that he had been contacted by the Lakers while playing for the University of San Francisco. In fact, behind the scenes, negotiations were being made with Russell while he was playing in college. However, Mikkelsen resisted the deal, and the owners sided with him, the deal was called off.


At that point I resigned my position and later the Lakers were sold and eventually moved to Los Angeles. Had that deal gone through, there’s no doubt that one of the owners, Morris Chalfen, was going to build a new arena to house the new powerhouse Lakers team – led by Bill Russell -- here in Minneapolis. Russell went on to lead the Celtics to nine NBA championships.

Sniff, sniff … is that the pungent aroma of “tanking” I detect in the air? Have we inadvertently stumbled upon the origin of this noxious practice, perhaps its originator? (For what it’s worth, Wikipedia lists Mr. Hartman as both living at 98 and still an active sports journalist!!)

Skepticism is understood … especially when you factor in that Mikan himself – who’d moved into the General Manager’s role when he retired following the Lakers’ final “Midwest” title in 1954 – re-joined the active roster in January of 1956 to provide a boost both to the squad and to the gate.

The dissolution of the Hartman Plan ended any Laker hope of landing Frank Ramsey … but not necessarily Russell. Just as Auerbach had been clued in early to the Big Guy’s potential by Bill Reinhart (his college coach), Mikan had been similarly reassured about Russ by the legendary Pete Newell.

The Lakers and Hawks had finished the season tied for second place in the Western Division … but with only the sixth-best records in the league. Despite qualifying for post-season play, they’d receive the second and third picks in the up-coming draft.

Regardless to head-to-head play, deadlocks in the standings back then were settled by a single-game playoff – in this case, also up for grabs was about $250 a man in second-place Bonus money. Though the homestanding Hawks sprinted to an early 10-point edge, Minneapolis assumed control of the game and “won their way” to the third pick in the draft.

What would have happened if Mikan controlled Pick No. 2? He’s unlikely to have traded the pick, nor is he apt to have passed on Russell.

Would Red have found a way to gain control the Royals’ No. 1 pick – that would have taken more than some preferential Ice Capades booking? (The deal with St. Louis, given the Macauley family crisis, had been almost a no-brainer.)

What ifs upon what ifs!!