Nate Robinson just can't sit still! He lives his life like he plays the game of basketball. He does a bit of everything and is always on the move. 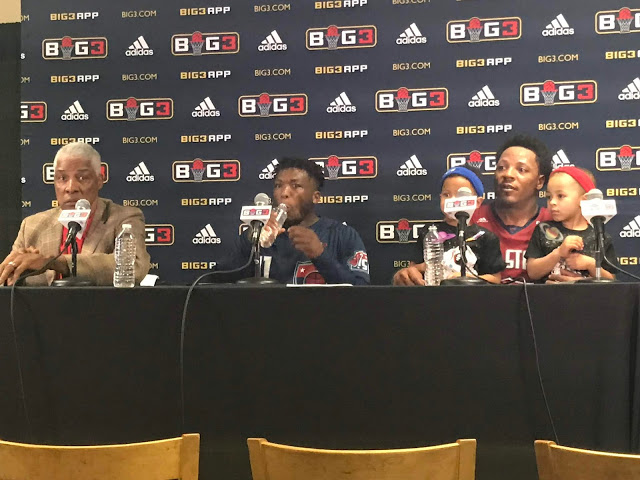 Robinson did finally sit for the press conference following his team's (Tri-State) win in the BIG3 game at TD Garden. As part of the press corps, my daughter, Lisa, and I were invited to attend the after-game press conference, take photos (as seen above) and interact with Tri-State Coach Julius Erving, Nate and David Hawkins.

Let me state emphatically that Nate can still play at a high level, and he has never lost the excitement for the game - or the ability to energize fans. But what I noticed about Robinson was that he was serious and focused most of the time, whether signing autographs, talking to the press or getting bounced around on the court by larger opponents. As I watched though, he used his lack of size and his quickness to take advantage of the same opponents when he was on offense. The video blow shows his lighter side, although this time it almost got out of hand.

Now for the more-serious side of Nate. The time he blocked 7'6" Yao Ming - an almost two-foot difference in height.

Okay, back to the light mode for Robinson. Nate had fun showing off his still-potent dunking ability over Shaquille O'Neal on the set of the recent Uncle Drew flick.

If you want to see Nate in action, take in the BIG3 when it comes to your city or watch it on Fox, FS1 or Facebook Watch. Or you can catch him in Uncle Drew, along with Shaq and Uncle Drew himself, Kyrie Irving. Robinson currently is hoping for another shot with an NBA team, and if that fails, he may head overseas - unless the studios decide to make an Uncle Drew sequel soon. The following is via Boston.Com's Nicole Yang:

Shams Charania of Yahoo Sports reported Robinson had signed a one-year contract with Homenetmen Beirut in Lebanon, but Robinson later said he hasn’t officially inked a deal and is holding out for a training camp invite from an NBA team.

Whether there’s still a place for him in the league remains to be seen, but regardless of what happens, Robinson said he would like to eventually pursue a career in entertainment. He currently has a podcast, “HOLDAT,” with former teammate Carlos Boozer and also recently appeared in Celtics point guard Kyrie Irving’s movie, “Uncle Drew.”

Whether serious or flighty, Nate is a pleasure to watch, on the court and off. Let's hope he lands a spot on on an NBA team that can use his services. Meanwhile, he will keep busy.