In this morning's NBA TV broadcast, Reggie Miller was stressing the importance of team chemistry in producing success in the League, and I just don't see that happening with this season's version of the Washington Wizards. John Wall has a contrasting view. 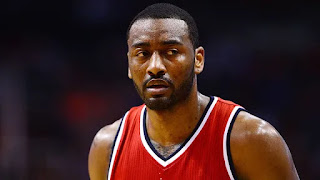 Wall only played 41 games last season due to injuries, and his team had 43 wins and 39 losses, grabbing the 8th seed in the Eastern Conference. They lost in six games to the Toronto Raptors in the first round of the playoffs.

Washington sent center Marcin Gortat, who bears a remarkable resemblance to the vampire, Kurt Barlow, in Salem's Lot, packing via trade. In his place comes the much-traveled (perhaps for good reason) Dwight Howard.

John feels that a number of teams in the East are now relatively equal since Lebron James has moved on to the Western Conference. The following is Wall's statement via Yahoo Sports Michael Lee:

“On paper, everybody looks great,” Wall continued. “We look great. Boston looks great on paper. But how are all those young guys going to mesh with Kyrie [Irving] being back? Or Gordon Hayward being back? Nobody knows how that’s going to work. Now, they’ve got a hell of a coach in Brad Stevens, and [with GM and president] Danny Ainge, they’re going to figure it out. But you still got to put it all together. You’ve still got to make it work on the court. We don’t know how Kawhi (Leonard) is going to work. We know what (Ben) Simmons and (Joel) Embiid are going to give you, but it’s a new year.”

As of late, Dwight Howard and team chemistry have not been regarded as synonymous in the minds of many NBA fans and analysts. The Wizards have added the also-much-traveled Jeff Green to the mix, and Austin Rivers came over in the Barlow (oops, I mean Gortat) trade.


John Wall has questions about how the Celtics will mesh with Kyrie and Hayward back, but thinks Brad Stevens, “a hell of a coach,” will figure it out with Danny Ainge. https://t.co/isGNC1xvzy
— Jay King (@ByJayKing) August 9, 2018

Does John Wall actually believe what he is saying? Maybe, but I feel he is simply attempting to generate energy and enthusiasm for the Wizards' upcoming season. We will see what June of 2019 brings.