Aron Baynes thinks there are definite similarities between the 2017-18 Celtics team and the Spurs 2012-13 crew that went on to win a Championship the following year. 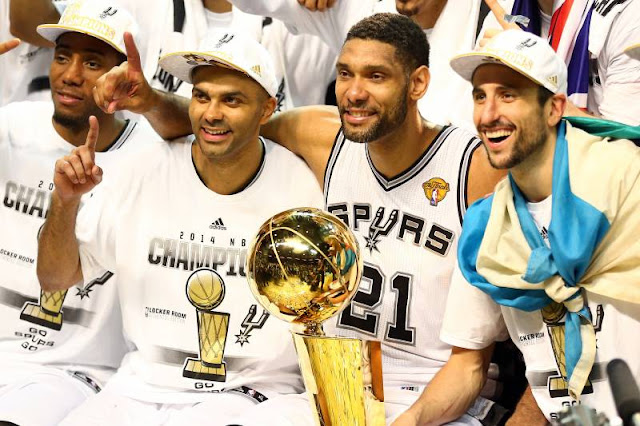 This comparison definitely starts with the coaches. Gregg Popovich and Brad Stevens are rated by many as the two best coaches in the NBA. Baynes stated that part of the reason for the Spurs success in the 2013-14 campaign was the break-out season for Kawhi Leonard who ended up walking away with the Finals MVP Award. One, or maybe be both, members of the Jay-Team may do the same this season. Jaylen Brown and Jayson Tatum have the potential to do just that this year.

Aron Baynes sees similarities between the 2017-18 Celtics and 2012-13 Spurs. One similarity he noted: Kawhi Leonard made a big jump that next season when Spurs won title.

Baynes: "I think we have some similarities in that as well with Jaylen and Jayson."

San Antonio was very deep in talent in their 2014 Championship year, with nine players getting 15 minutes or more of floor time. Aron only played 7.2 minutes per game in the playoffs but was efficient, scoring 2.3 PPG and grabbing 2.2 RPG. His per-36-minute projection would be a double-double of 11 points and 10 rebounds.

Still comparing both teams, they were (are) sparked by veteran point guards, Tony Parker and Kyrie Irving. The Big Fundamental, Tim Duncan, was the leader, on the floor and off, for the Spurs, and Al Horford is charged with the same duty.

In the Title season, Duncan, Parker and Leonard were backed up by the ever-valuable Manu Ginobli, Marco Belinelli, Boris Diaw, Danny Green, Patty Mills and Tiago Splitter. Al, Kyrie, Jayson and Jaylen await the return of Gordon Hayward and have Marcus Smart, Daniel Theis, Terry Rozier, Marcus Morris, Semi Ojeleye - and yes, Aron Baynes to rely on for back-up production. San Antonio went 9-deep with players logging 15 minutes or more. The Celtics have 11 guys capable of doing the same. As I write this, I am reminded of just how good this version of the Celtics can be. The following via Wikipedia:

Unlike the previous year, the Spurs avenged their NBA Finals loss and became NBA Champions after defeating Miami in five games, winning their fifth NBA Championship. The Spurs outscored the Heat in the series by the largest per game average point differential (14.0) in Finals history. San Antonio's Kawhi Leonard was named the Finals Most Valuable Player (MVP).

The Spurs overcame the Heat 4-1 in the Finals in 2014 and outscored them by 14.0 points/game. If Boston can stay healthy and pick up a bit of good luck this time, they can go all the way. Let's look for a break-out by Jaylen, Jayson - or both.