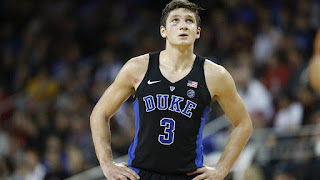 All of the draft fantasizing ends tonight and reality will take over. The Celtics own the #27 pick in the first round of the NBA draft, and assuming they retain it, Duke's Grayson Allen may be Danny Ainge's best bet.

It seems likely, though not certain, that Allen will still be available in the latter portion of Round One. He could also drift into the second round. After spending his four years at Duke, the 22-year-old may prove to be an immediate rotation player for Brad Stevens.

NBA Draft Combine numbers list Grayson at 6'4.5", 198 pounds with a 6'7,25" wingspan. He is under-rated athletically but displayed a 40.5" vertical leap and a 10.31-second lane agility time. He also came in at a lean 5.55% body fat percentage. He definitely has an NBA-ready physique. Here is some analysis from NBADraft.net's Jorrge Nixon:

Competitive, sometimes overly so shooting guard with a pure shooting stroke and solid ability to attack the rim ... Underrated athlete with a 40.5 inch vertical (measured at Combine) ... Was Duke's big late game hero in their last NCAA title three years ago ... What can't be taken away from Allen is his career production and his willingness to sacrifice for his team. He has the ability to put the ball on the floor and create some offense, and is pretty good at scoring on the move without the ball too ... Solid leaper who is capable of playing above the rim in space, and with adequate body control … Has some good natural ability, and when focused he can shoot well whether stationary or off a screen or curl, and is relatively comfortable creating for himself and his teammates … Pretty decent pick and roll player with a willingness to feed bigs on their way to the rim … Not a selfish player, will put his body on the line on both ends, and is pretty adept at taking charges. Had to embrace a “villain” persona, assumed a leadership role on a young team in his last season, and there is something to be said about how he adjusted his mindset and role playing with basically a new cast of players in each of his seasons at Duke.

Allen averaged 15.5 PPG, 3.3 RPG, 4.6 APG and 1.7 SPG this past season. He is listed as a shooting guard but can play the point. With his toughness and willingness to sacrifice for the team, he could be a great fit with Boston as a back-up combo guard. This is what Duke Coach Mike Krzyzewski had to say about Allen (per Boston.Com's Nicole Yang):

“I think Grayson has got a chance to go in that 20 to 30 range,” Krzyzewski said. “He’s going to be a really good pro player because he can shoot, he can score, he can play that combo guard, and he’s a great athlete. And he’s 22. He’s not a young kid.”

“He’s just played four years under a microscope, and if he went to Boston, that would be great,” he continued. “For my guys, I just want them to go to really good franchises where they are coached well. I’m not saying any of them are bad, but there are some that are better, and Boston is one of the better ones.”

The Celtics already have four Duke alumni in co-owner Steve Pagliuca, Jayson Tatum, Kyrie Irving and Semi Ojeleye. Grayson's reputation as a "too competitive" player with limited athleticism may allow him to drift down to the Celtics at #27 or even to the second round if the team buys into it. A fifth Duke alumnus would not be a bad outcome for Boston in tonight's draft.