If you CAN beat them, join them? 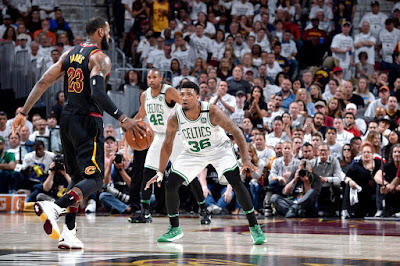 Former Boston Celtics big man Antoine Walker thinks that LeBron James, the man who virtually beat the feisty Hospital Celtics single-handedly in the 2018 NBA Eastern Conference Finals, should decamp from the team he dragged into the NBA Finals for Boston.

Without giving away too much of his reasoning, he makes a solid case on a superficial level. However, fit and shared goals of dethroning the Golden State Warriors is not as perfect of a match as it may seem, as any move to bring on James from the Cleveland Cavaliers would have to involve a sign-and-trade close enough to a tier-three max contract to be CBA-legal.

Clocking in at a hefty $35 million, such a deal would have to include a marquee player from Boston's roster, like Al Horford, Gordon Hayward, or - ironically, given how he ended up on Boston's roster in the first place, Kyrie Irving. Of course, it's possible in such a scenario LeBron would take a paycut, but even then, unless it was a massive one, it'd then require including some of the Celtics' best young talent.

There's arguably no more talented player in the league even now, after eleven seasons in the league and more minutes than damn near anyone who's played that long, but given Boston's long, fraught history with James and the high cost it'd likely take to bring him on board, I'm going to go out on a limb and say the fanbase would not be into any such offers.

What do you think? Watch the video below and here Antoine out, then let us know your feelings on the idea in the comment section below.